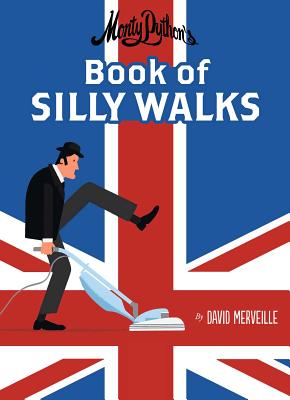 Monty Python's Book of Silly Walks by illustrator David Merveille features Mr. Teabag--one of John Cleese's best-loved characters from Monty Python's Flying Circus. Python fans will delight in Merveille's artistic portrayal of Mr. Teabag in his most iconic silly-walk pose as he hysterically stands in as housekeeper, soccer player, fire-ring walker, guard at the Buckingham Palace, James Bond, DaVinci's Vitruvian Man, and more Over 40 years ago, a group of five Englishmen - and one wayward American - rewrote the rules of comedy. MONTY PYTHON'S FLYING CIRCUS, an unheralded, previously unseen half-hour show of sketches, hilarities, inanities and animations, first appeared on the BBC late one night in 1969. Its impact has been felt on the world ever since. From its humble beginnings, it blossomed into the most influential movement in modern comedy.

David Merveille works for the press and teaches graphics and illustration at the Institut Saint-Luc in Brussels. He has worked on many publicity campaigns in France and Belgium, and creates posters and illustrations for a daily newspaper called La Libre Belgique. Other books by Merveille include-Le Jacquot de Monsieur Hulot--2005-Hello, Mr. Hulot--2013-Mr. Hulot at the Beach--2015.
Loading...
or
Not Currently Available for Direct Purchase