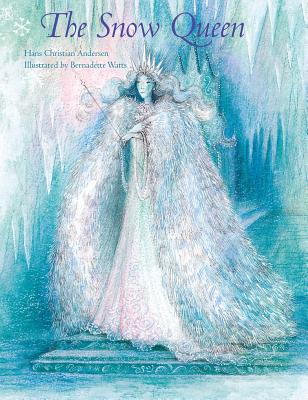 The story that was the inspiration for The Lion, the Witch, and the Wardrobe by C.S. Lewis and more recently, Frozen by Disney is re-designed in celebration of 50 years of working with Bernadette Watts—one of Europe’s most recognized and beloved fairy-tale artists, known in Europe simply as Bernadette.

When a young boy is cursed and unable to detect goodness, a young girl goes on a courageous journey to restore his heart and free him from the palace of the Snow Queen.

Stunning illustrations bring new life to this lasting piece of literature that has thrilled young readers for over a century.

Praise for Bernadette Watts
Little Red Riding Hood, “My what big talent she has!” — Kirkus Reviews
The Three Little Pigs, “A marvelous offering that begs to be added to everyone’s storytelling repertoire.” — School Library Journal

Bernadette Watts, known throughout Europe simply as Bernadette, has illustrated many dozens of folk- and fairy tales. Born in England, she loved to draw from childhood. She studied at the Maidstone Art School in Kent, UK, for a time under the tutelage of Brian Wildsmith. Bernadette’s many beautiful books include The Snow Queen and The Bremen Town Musicians. Bernadette finds her inspiration in nature. Today she lives and works in Kent. She has been illustrating for NorthSouth Books and NordSüd Verlag since the beginning of her career fifty years ago.

Hans Christian Andersen was born in 1805 in Odense, Denmark. Andersen became famous for his collection of 156 fairy tales: his were the most important art fairy tales of the Biedermeier period. He died in 1875 in Copenhagen.
or
Buy Here
Copyright © 2020 American Booksellers Association