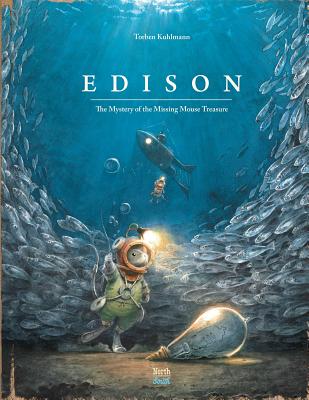 The Mystery of the Missing Mouse Treasure (Mouse Adventures)

A long time ago, one mouse learned to fly, another landed on the moon...what will happen in the next Mouse adventure?

From the creator of Lindbergh—The Tale of a Flying Mouse and Armstrong, comes Edison—The Mystery of the Missing Mouse Treasure.

When two unlikely friends build a vessel capable of taking them to the bottom of the ocean find a missing treasure—the truth turns out to be far more amazing.

Praise For Edison: The Mystery of the Missing Mouse Treasure (Mouse Adventures)…

*Starred Review. Edison is a beautiful and inspiring tale about two tiny creatures who refuse to belittle themselves by accepting the limits of “Never!” and who are awarded with history-shaping truth for their efforts.
— Michelle Anne Schingler

As in Kuhlmann's Armstrong (2016) and Lindbergh (2014), the journey turns out to be at least as rewarding as the prize.
— Kirkus Reviews

Recommend this engrossing mix of STEM and animal adventure to kids fascinated by engineering or invention.
— Sarah Hunter

“This beautifully illustrated story is a feast for mind and eyes and a strong selection to complement STEAM curricula."—School Library Journal, Starred Review

Praise for Lindbergh—The Tale of a Flying Mouse

“Perhaps the most visually stunning book of the year.”—The Huffington Post

Torben Kuhlmann studied illustration and communications design at the Hamburg University of Applied Science, with book illustration as his main subject. In June 2012 he finished his studies by writing and illustrating the children’s book Lindbergh—The Tale of a Flying Mouse. This was his first picture book, and within a very short time it became a best seller. It has now been translated into more than thirty languages. Further mouse adventures followed with Armstrong (2016), Edison (2018), and Einstein (2021), all of which have achieved cult status.
Loading...
or support indie stores by buying on