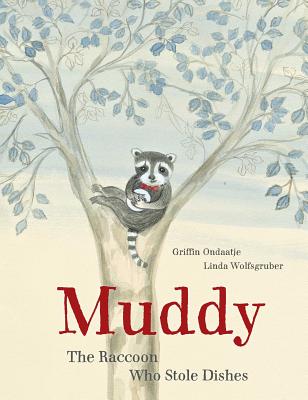 The Raccoon Who Stole Dishes

"A community of raccoons is happy catching their own food, but one dreams of something more gourmet." - Kirkus Reviews

Muddy the raccoon loves leftovers--and he likes to eat them on plates. “Our son’s a picky eater,” his parents say.

When Muddy gets caught, the oldest, wisest raccoon insists he make amends. But when all 27 raccoons enter the restaurant to return Muddy’s stolen plates, what happens next is not what anyone expects.

Mischievous Muddy will steal your heart!

"A tender story, eloquently rendered."— Publishers Weekly, STARRED REVIEW
"A lesson in empathy—for animals but also in general—delivered at a pace as stately as a camel’s." —Kirkus Reviews
"This will appeal to many ages, both as a peek into another culture and as an engaging story about a creature that finally gets the empathy it deserves."—Booklist

Praise For Muddy: The Raccoon Who Stole Dishes…

Griffin Ondaatje was born in Kingston, Canada. He is the author of The Mosquito Brothers, and The Camel in the Sun, illustrated by Linda Wolfsgruber, which was selected for the Austria Children’s Book Prize and shortlisted for the Middle East Book Award. He also edited The Monkey King and Other Stories, a collection of South Asian stories, folktales and legends, and directed Complete Unknown, a documentary film about Bob Dylan. His books have been translated into German, Korean, Arabic, Italian and Swedish. He has three children and lives in Cambridge with his family.

Linda Wolfsgruber was born in South Tyrol, Italy. She is a world-renowned artist who has exhibited her work throughout Europe and in the United States and Japan. She has won many awards, including the Austrian Art Award (2016), the Children’s and Juvenile Book Award for Illustration (four times), and the Golden Apple of the Biennial of Illustration Bratislava. She is on the shortlist for the Hans Christian Andersen Award (2018). She lives in Vienna.
Loading...
or
Not Currently Available for Direct Purchase