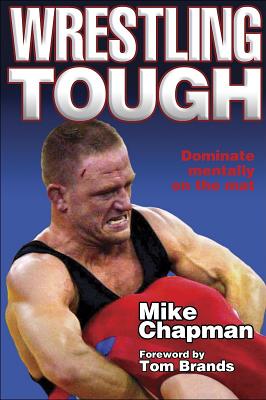 Wrestling as much as any sport requires a special type and level of courage. The arduous training, periodic weight cutting, and public arena for performing are challenges that intimidate all but a special breed of athlete. And that is not to mention the sport's very essence: facing off against an opponent who wants to do nothing less than dominate you physically, destroy you emotionally, and humiliate you mentally.

Wrestling Tough is a unique look at the “stuff” that has characterized the greatest competitors to ever take the mat. Award-winning author Mike Chapman first presents the attributes that serve as a common link among wrestling champions through the decades. From there he details how and when these attitudes, thoughts, and behaviors manifest themselves in the training room and in competition.

Even the best athletes and most successful coaches will find something new to add to their skill set. Let Wrestling Tough be your guide to a championship-level mindset.

“Wrestling Tough is much more than learning about being successful on the mat. It's for all who would like to dominate or develop a passion for any sport. Incredible reading! Get energized and be entertained at the same time.”
Dan Gable
Olympic champion and 2-time NCAA champion wrestler
Olympic and 15-time NCAA team champion wrestling coach

Wrestling Tough is what our sport is all about! Get an inside look at the greatest competitors in wrestling as told by Mike Chapman, the best writer in the history of the sport.
Mark Johnson
Head Coach, University of Illinois

Mike Chapman is the founder and executive director of the International Wrestling Institute and Museum, an organization that markets the sport worldwide. He has written over 700 columns on the sport of wrestling with his work appearing in a dozen national magazines. He is also the author of 16 books, 12 of which are about wrestling. The former director of communications for USA Wrestling has also attended 35 NCAA wrestling tournaments, two Olympics, and two World meets.

Chapman has been named National Wrestling Writer of the Year four times and was co-winner of the IMPACT of the Year Award by WIN magazine in 1999. In 2002, he received the Lifetime Achievement Award in wrestling from the Cauliflower Alley Club. He is also the founder of WIN magazine and originated both the WIN Memorabilia Show, now in its 13th year, and the Dan Hodge Trophy. Chapman and his wife, Beverly, reside in Newton, Iowa.