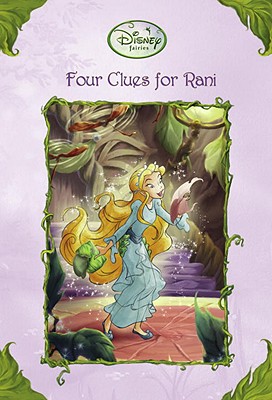 "Four Clues for Rani" is the 20th book in our Disney Fairies chapter book series, which features Tinker Bell's adventures with her fairy friends in Never Land.
For two weeks, Pixie Hollow has been in a terrible dry spell. Everyone is frazzled, especially Rani and the other the water-talent fairies. When the dry spell finally ends, Queen Clarion decides it's time for a treat a fairy treasure hunt But on the day of the treasure hunt, Rani wakes up late. Her friends all have partners already, so Rani is stuck with the slowest-moving sparrow man around. To make things worse, she has a bet with Vidia. If Vidia finishes before her, Rani will have to do whatever the fast-flying fairy wants. This is one contest Rani can't let herself lose

A former editor at Disney, Harper, and Simon & Schuster, CATHERINE DALY has written many books for young readers, including the Disney Fairies chapter book "Prilla and the Butterfly Lie" and popular paperback titles such as "Knights, Who Are You Really?, All Aboard Cars, " and "Daddy and Me." She lives in New York.
Loading...
or
Not Currently Available for Direct Purchase