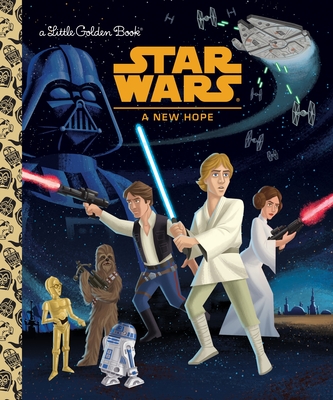 The epic space saga, Star Wars: A New Hope, is finally retold in the iconic Little Golden Book format! Luke Skywalker begins a journey that will change the galaxy, as he leaves his home planet, battles the evil Empire, and learns the ways of the Force. Featuring stunning retro illustrations, this book is perfect for Star Wars—and Little Golden Book—fans of all ages!

Geof Smith is a children’s book author and editor. He doesn’t currently have a pet, but hopes to one day solve crimes with a super-intelligent chimpanzee. He has worked on A New Hope (Star Wars) and Everything I Need to Know I Learned from a Star Wars Little Golden Book, among others.

Caleb Meurer is an artist and illustrator living in Los Angeles. He is best known for his work as a storyboard artist for the SpongeBob SquarePants movies and television series. He is the illustrator for the Golden Books Star Wars series, including A New Hope and The Force Awakens. His other works include Don’t Rock the Boat, Don’t Pencil Me In, and Pest of the West.
Loading...
or support indie stores by buying on