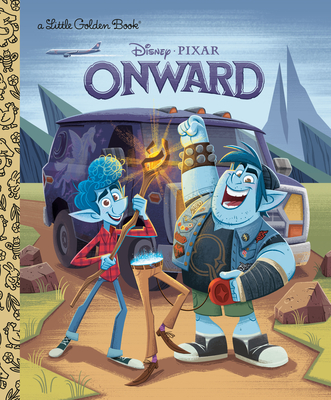 Set in a suburban fantasy world, Disney and Pixar's Onward introduces two teenage elf brothers, Barley (voice of Chris Pratt) and Ian (voice of Tom Holland), who embark on an extraordinary quest to spend a day with their late dad. Along the way, they meet The Manticore (voice of Octavia Spencer) who later teams up with their mom, Laurel (voice of Julia Louis-Dreyfus), to find them before they unleash a dangerous curse. Brought to you by the team behind 2013's Monsters University, Onward is now streaming on Disney+. Relive the excitement of the movie with this Little Golden Book adaptation that's perfect for girls and boys ages 2 to 5, as well as Disney Little Golden Book collectors of all ages!

Established in July 2013 in a merger between Penguin and Random House, Penguin Random House, with nearly 250 independent imprints and brands on five continents, more than 15,000 new titles published each year, and close to 800 million print, audio, and eBooks sold annually, is the world’s leading trade book publisher. Like its predecessor companies, Penguin Random House is committed to publishing adult and children’s fiction and nonfiction print editions and is a pioneer in digital publishing. Its publishing lists include more than 60 Nobel Prize laureates and hundreds of the world’s most widely read authors.
Loading...
or support indie stores by buying on