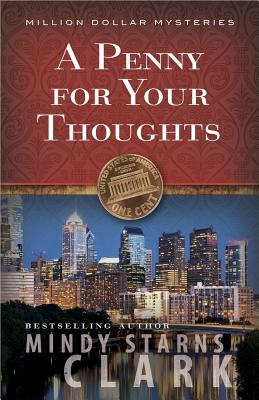 A Penny for Your Thoughts

Attorney Callie Webber investigates nonprofit organizations for the J.O.S.H.U.A. Foundation and awards the best of them grants up to a million dollars. In each book of the series, Callie comes across a mystery she must solve using her skills as a former private investigator. A young widow, Callie finds strength in her faith in God and joy in her relationship with her employer, Tom.

In book number one of The Million Dollar Mystery series, Callie's assignment is to go to Philadelphia and present Wendell Smythe, an old family friend of her boss, Tom, with a check for $250,000. Mr. Smythe heads a relief organization and needs immediate funds. When Callie goes to his office, check in hand, she discovers him dead on the floor. At Tom's request, Callie moves into Smythe's home and begins a murder investigation.

But it's a dangerous place to be, for the family has secrets they would rather not have uncovered. Callie's only hope is that God will help her use her investigative skills to discover the murderer and escape the web of deceit that surrounds her.