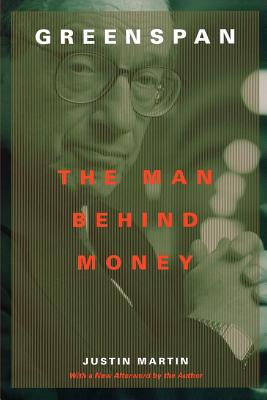 The Man Behind Money

Alan Greenspan is one of the most powerful and enigmatic men in the world. Although endlessly pursued by the press and ceaselessly present in the public spotlight, very little about his private life has ever been revealed. Greenspan: The Man Behind Money presents the celebrated Fed Chairman as few know him. It spans his hardscrabble childhood in Depression-era New York City, his fascinating decades-long friendship with controversial author Ayn Rand, his Juilliard education and days spent touring with Henry Jerome's jazz band, as well as his two marriages, dynamic D.C. social life, and service to five U.S. presidents. Artfully crafted, this biography paints an astonishing and enthralling portrait. Based on unprecedented access to Greenspan's family members and to such peers as Henry Kissinger, Gerald Ford, and Milton Friedman, Greenspan: The Man Behind Money makes news and breaks new ground. It also provides fresh insight into Greenspan's reign at the Fed -- from the stomach-churning crash of 1987 to today's rollicking markets -- and a glimpse at what's next for the famous Chairman.

Justin Martin is a former staff writer at Fortune magazine whose work has also appeared in Newsweek, Worth, Travel & Leisure, and ESPN magazines. He lives in New York City.
Loading...
or support indie stores by buying on