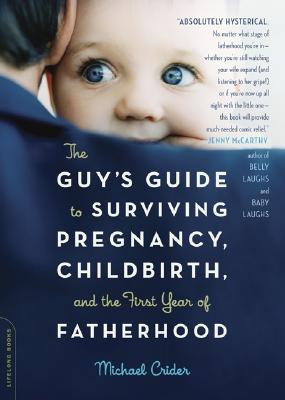 The Guy's Guide to Surviving Pregnancy, Childbirth, and the First Year of Fatherhood (Paperback)

"Absolutely hysterical. No matter what stage of fatherhood you're in -- whether you're still watching your wife expand (and listening to her gripe!) or if you're now up all night with the little one -- this book will provide much-needed comic relief." (Jenny McCarthy, author of Belly Laughs)
From the moment he hears the unexpected news that the pregnancy test is positive to the end of his son's first year of life, Michael Crider is awed, anxious, and all-too-human. In between these milestones, he endures the aches and pains of his wife's pregnancy (which had a clear impact on his own bodily comfort), swallows his pride when bunny wallpaper replaces his beloved Budweiser mirror, has a short and only partially-appreciated stint as her labor coach on the Big Day, and experiences every one of his son's "firsts" as though they were his own.
Honest, informative, hilarious, and heartwarming, The Guy's Guide to Surviving Pregnancy, Childbirth, and the First Year of Fatherhood is a must-read for all new parents.

Praise For The Guy's Guide to Surviving Pregnancy, Childbirth, and the First Year of Fatherhood…

"Funny, true, and often times racy, Crider's book is refreshing...first-time dads will learn plenty from his anecdotes because they'll be going through the same thing."—Boston Parents Paper/Bay Area Parent

"This book will grab you and not let you go-a must read. The perfect gift for Father's Day...A great read for Dad or a special man in your life."—Nashville City Paper

"Refreshing...That The Guy's Guide's making you laugh is its first priority, over delivering a few sensible tips and advice, is proof of its effectiveness."—Chicago Tribune

"Books for expectant fathers are usually drier than a talcumed bottom, but Crider's is a hilarious, shoot-from-the-hip take on what to expect pre- and postpartum."—Life

"Lighthearted and humorous take on pregnancy and beyond...Certainly a lot more entertaining than What to Expect When You're Expecting."—Boston Globe

"Funny, somewhat informative and a little mushy, this book is just what the doctor ordered."—Newsday
or
Buy Here
Copyright © 2020 American Booksellers Association