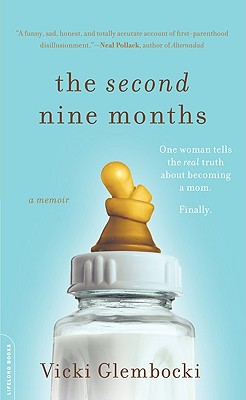 One Woman Tells the Real Truth about Becoming a Mom. Finally.

I want to walk out of Target and leave Blair there, wailing . . . Nice people work at Target. Surely someone would take her home and care for her and buy her pretty things. So begins Vicki Glembocki's brutally honest yet hilarious memoir of her agonizing transition into motherhood. Why agonizing? Because no one told her how tough it would be. Finally, Glembocki lays out the truth about those first months with baby: the certainty that you're doing everything wrong; the desire to kill your husband, your mother, your dog; the struggle to balance who you were with whom you've become-a mother. Unlike any other book on motherhood, Glembocki breaks the New Mother Code of Silence, proving that "maternal bliss" is not innate, but learned. Funny and wise, she connects with new moms on a shockingly intimate level, letting them know that they are not alone.

Praise For The Second Nine Months: One Woman Tells the Real Truth about Becoming a Mom. Finally.…

Mid-Ohio Valley Parent Magazine, 2/16/09
“This mom’s memoir shows a different side to the new mom—the mom who is exhausted, has an extremely fussy baby, who wonders if she made a mistake…It’s that kind of frankness that makes this book such a compelling read.”

Vicki Glembocki is a columnist for Women's Health and a writer-at-large at Philadelphia Magazine. She, her husband, Thad, and her two daughters live in southern New Jersey.
Loading...
or support indie stores by buying on