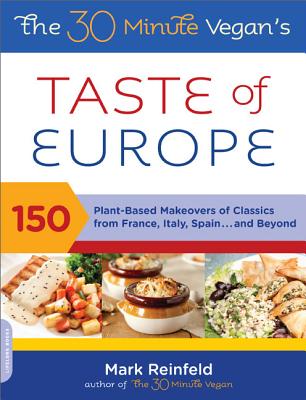 150 Plant-Based Makeovers of Classics from France, Italy, Spain . . . and Beyond

Named One of the top five cookbooks of 2012” by Vegetarian Times magazine and One of the top 10 Vegan Cookbooks of the Year by VegNews magazine
A Culinary Tour de Force of Europe’s Most Treasured Dishes
Are you looking for delicious and healthy cuisine that can fit into your busy lifestyle? Do you long for the robust flavors of Italy, France, Spain, or Greece but haven’t found tasty animal-free recipes? Look no further! The 30-Minute Vegan is where the Joie de vivre meets la dolce vita to satisfy even the most discriminating palates. Award-winning author and chef Mark Reinfeld tackles the meaty fare that is European cuisine, offering inspired plant-based versions of everything from manicotti to French onion soup, moussaka to “notwurst.”  Including key pantry ingredients (with a special section on herbs), raw and gluten-free options (virtually all of the recipes are gluten-free), and suggestions for wine and beer pairings, Taste of Europe is a revolutionary cookbook that will help you to recreate all of your favorite classic European dishes in 30 minutes or less.
The book consists of seven sections:
1. Italy with recipes including Fire Roasted Minestrone, Fettucini Alfredo, Tofu Scallopini, Gnocci, Manicotti, and Vegan Gelato.
2. Francewith recipes including French Onion Soup, Quiche Monet, Seitan Bourguignon, and Chocolate Hazelnut Crepes.
3. Spain and Portugal with recipes including Gazpacho, Empanadas, Artichoke Heart and Saffron Paella, Tempeh Romesco, Almond Brittle, and Horchatta.
4. United Kingdom and Ireland with recipes including Irish Stew, Scottish Crumpets, Yorkshire Pudding, Vegetable Pot Pie and Currant Scones.
5. Greece with recipes including Stuffed Grape Leaves, Tzatziki, Moussaka, Spanikopita, and Baklava.
6. Germany with recipes including Beer Soup, Vegan Schnitzel, Tempeh Sauerbraten, Apple Strudel, and Black Forest Parfait.
7. Europe Fusion with an assortment of recipes from Poland, Iceland, Hungary, Romania, Finland, Czechoslovakia, Switzerland and more!

Mark Reinfeld, founding chef of the celebrated Blossoming Lotus Restaurant, has been preparing inspired vegan and live food cuisine for more than fifteen years. His Vegan Fusion World Cuisine has won nine international awards, including a Gourmand Award for “Best Vegetarian Cookbook in the USA.” He is also the author of The 30-Minute Vegan and The 30-Minute Vegan's Taste of the East.
www.veganfusion.com

Praise For The 30-Minute Vegan's Taste of Europe: 150 Plant-Based Makeovers of Classics from France, Italy, Spain . . . and Beyond…

Dreena Burton, author of Let Them Eat Vegan and eat, drink & be vegan
“Mark Reinfeld delivers cookery brilliance in Taste of Europe. With culinary finesse, he elevates traditional European dishes to plant-based prestige!  Now you can savor delicacies from Spain, Germany, Italy, France—and more—in the comfort of your own vegan kitchen. Mark, you had me at ‘Vegan Gelato’!”

Julie Hasson, author of Vegan Diner and The Complete Book of Pies
“The 30 Minute Vegan’s Taste of Europe is jam-packed full of vibrant, delicious, healthful recipes that are better than a trip to Europe! This book is a must-have for every kitchen.”

Julieanna Hever, MS, RD, CPT, Plant-Based Dietitian and author of The Complete Idiot's Guide to Plant-Based Nutrition
“This tasty culinary expedition provides a perfect combination of exotic and familiar dishes to enthrall any curious cook. I am eternally grateful to Mark Reinfeld for veganizing these exquisite traditional recipes so we may enjoy them while sustaining a healthful and compassionate diet.”

Colleen Patrick-Goudreau, bestselling author of The Joy of Vegan Baking and The 30-Day Vegan Challenge
"From one compassionate recipe to the next, this globetrotting culinary tourdeliciously melds the flavors and aromas of the Old World with modern vegan sensibilities."

Lindsay S. Nixon, author of The Happy Herbivore Cookbook, Everyday Happy Herbivore and Happy Herbivore Abroad
“Any European delicacy or tradition you thought you couldn't have as a vegan, now you can! Mark has beautifully captured all the taste of Europe with fresh, fast and healthy recipes!”

Brendan Brazier, author of Thrive Foods
"These quick and tasty recipes are ideal for anyone who wants to transition to a vegan diet...without knowing it!"


Victoria Moran, author of Main Street Vegan and director, Main Street Vegan Academy, Oct 2, 2012
"The classic dishes of Europe used to seem 'above and beyond' either my culinary talents or the parameters of plant-based fare, but The 30-Minute Vegan's Taste of Europe changes all that. Mark Reinfeld has created a culinary treasure trove, even masterfully veganizing the scones I learned to love as a student in England. Imagine it: tea time, with no compromises."

Vegetarian Times magazine
“One of the top five cookbooks of 2012”

One of theVegetarian Times’s Top Five Cookbooks of 2012

PrestigeduMonde.com, 12/17/12
“Part cookbook, part travel log, all interesting…If you are looking for delicious, animal-free meals that fit one’s modern 9-5 schedule, this is the cooking bible you’ve been waiting for.”

Curled Up with a Good Book
“Overall Reinfeld’s book offers a large variety of relatively easy-to-follow recipes with a European flair. Recommended.”

Jack Norris, Registered Dietitian, coauthor of Vegan for Life
“With Mark Reinfeld’s guidance, anyone can produce impressive and delicious vegan meals. Sure to become a classic of healthy and humane cuisine, Taste of Europe is packed with easy recipes that will appeal to vegans and meat-eaters alike."

Virginia Messina, MPH, RD, vegan dietitian, coauthor of Vegan for Life
“Mark Reinfeld takes compassionate cooking to a new level with these incredible recipes. Taste of Europe makes vegan meals accessible to everyone—and is the perfect cookbook for when you want to impress your meat-eating friends."

CookbookMan.com, 9/26/12
“The once sparse space of vegan cookbooks is starting to fill up fast. The 30 Minute Vegan’s Taste of Europe fills the vegan international cuisine void nicely.”

Tucson Citizen, 10/5/12
“A delightful cookbook which will appeal to not just vegans but also those who are gluten-intolerant.”
or
Buy Here
Copyright © 2020 American Booksellers Association