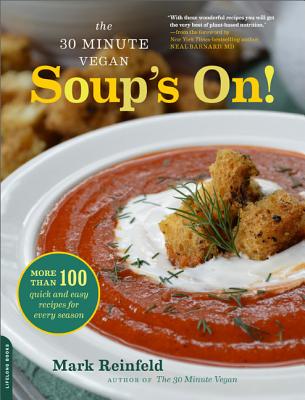 Soup's On!: More than 100 Quick and Easy Recipes for Every Season

In this definitive guide to vegan soups, award-winning chef Mark Reinfeld gives you all the tools and tips to create easy, flavorful meals--within thirty minutes or less. Prepare to feast upon a wide array of plant-based soups-from consommés to stews, chowders to raw and dessert soups. From a selection of stocks to irresistible toppings and accompaniments, these inspired recipes cover a broad spectrum of international cuisine.

Soup's On! contains an inspiring foreword by Dr. Neal Barnard and is divided into six sections:

Soup's On! proves that you don't need meat or dairy--or a lot of time--to have a hearty, satisfying meal in a bowl!

Praise For The 30-Minute Vegan: Soup's On!: More than 100 Quick and Easy Recipes for Every Season…

“Mark Reinfeld may be the male equivalent to a vegan Rachael Ray—his recipes are flavorful and approachable and certainly have the same potential for mass appeal…Reinfeld's enthusiasm for diverse cuisines sets the book apart…Omnivores and vegans alike will appreciate the book's breadth and depth, as well as the limited call for esoteric or arcane ingredients…A terrific resource when the urge for a comforting soup hits.”

“Vegans who enjoy soups and like spending time in the kitchen will find plenty to keep them busy and satisfied here.”

“Want a definitive guide to vegan soups? Then this is the cookbook for you.”

“Award-winning chef Mark Reinfeld will inspire year-round soup supping…you'll love getting your soup on with this inspiring book!”

Vegetarians in Paradise, February 2014
“Mark Reinfeld has added another 30 minute gem to his list of books that make vegan cooking so much easier and peaceful. The recipes are not only delicious, but they also display the mantle of good health.”
or
Buy Here
Copyright © 2020 American Booksellers Association