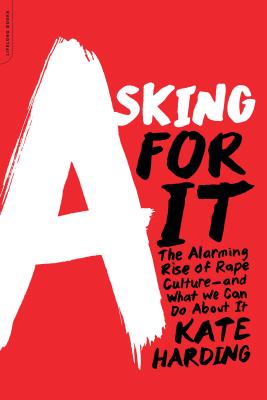 In the era of #metoo, a clear-eyed, sharp look at rape culture, sexual assault, harassment and violence against women--and what we can do about it.

Every seven minutes, someone in America commits a rape. And whether that's a football star, beloved celebrity, elected official, member of the clergy, or just an average Joe (or Joanna), there's probably a community eager to make excuses for that person.

In Asking for It, Kate Harding combines in-depth research with a frank, no-holds-barred voice to make the case that twenty-first-century America supports rapists more effectively than it supports victims. From institutional failures in higher education to real-world examples of rape culture, Harding offers ideas and suggestions for how we, as a society, can take sexual violence much more seriously without compromising the rights of the accused.

Praise For Asking for It: The Alarming Rise of Rape Culture--and What We Can Do about It…

AV Club, 8/19/15
"It's less depressing than it might sound, in part because of Harding's funny and occasionally sarcastic style, and for something so full of facts and figures, it's a pretty enthralling read. This book probably isn't going to get through the thick skulls of true rape apologists, but it is a good read if you keep hearing the term “rape culture” and don't really know what it means, or if you're enraged by the media that calls Patrick Kane a 'target' of a rape investigation instead of a 'subject' of one."

Bitch Magazine, 9/2/15
“Asking For It offers a smart, concise, and surprisingly funny contribution to the dialogue on patriarchy, misogyny, and rape.”

Library Journal, 9/1/15
“Harding's book serves as a welcome addition to the conversation…she doesn't mince words…meticulously documented…Harding writes with courage and passion that may rankle some readers—which might not be an entirely bad thing.”


"Asking for It is a must-read for anyone who cares about ending sexual violence. Kate Harding takes on politicians, the media, and commonly held myths in a way that's accessible for antiviolence experts and novices alike. This is a timely and brilliant book that will put a much-needed dent in rape culture."—Jessica Valenti, author of The Purity Myth and He's a Stud, She's a Slut

"[A]n unflinching and nuanced map of a culture in crisis; Harding's singular voice makes it a page-turner. It's required reading for anyone who wants to know why there's so much fuss about rape culture these days, as well as for everyone who wants to do something about it."—Jaclyn Friedman, editor, Yes Means Yes

Chicago Reader, 1/2/15
“[Harding] has an amazing capacity for transforming her outrage into clear, considered arguments.”

Bustle, 8/27/15
“Harding skillfully breaks down the factors that have converged to create the United States' rape culture. Asking For It mixes statistics and research with true stories that show our flawed collective attitude toward sexual assault, resulting in a book that will leave you both outraged and inspired to make change happen.”


Slate, 8/20/15
"Asking for It serves as a useful reminder of why we still need books—even nonfiction books—in the age of the Internet. Just the sheer volume of stories and examples Harding collects in one place is disquieting and extremely convincing in a way that getting it in pieces through the day-to-day grind of Internet reading will never accomplish. Harding doesn't shy away from tough topics, especially when it comes to false rape reporting. To be clear, this book is not a chronicle of depressing stories of sexual assault, which would be a miserable read. Harding isn't here simply to register the existence of crime; she is working as a cultural critic, focusing on the cultural response to and understanding of sexual assault more than the crimes themselves. Luckily for the reader, Harding has a wicked sense of humor."

Los Angeles Times, 8/23/15
"Deft and timely... Informative and informal, the book is a smart, impassioned and well-researched agenda for a strictly no-nonsense understanding of rape culture."

New York Journal of Books 8/25/15
“Insightful and provocative book…Using news from current popular culture, as well as her own experiences, Harding has put together a no-holds-barred examination of the social phenomenon of rape culture…Everyone should read this book no matter their gender identification, sexual orientation, religious, or political beliefs….The book is written accessibly and intelligently, without hyperbole, and is a sincere work of scholarship no library or bookshelf should be without.”

The Week, 10/9/15
“Journalist Kate Harding, who possesses ‘a finely honed impatience with bull----,' has produced a valuable primer on sexual violence in America. It makes clear how rarely rapists are held accountable and how much damage is done by the popular beliefs that false rape accusations are common and that the line between consent and refusal is ambiguous. If the concept of ‘rape culture' baffles you, this is the book to read.”

Kate Harding is the coeditor of Nasty Women: Feminism, Resistance, and Revolution in Trump's America, coauthor of Lessons from the Fat-o-Sphere and a contributor to The Book of Jezebel. The cohost of the Feminasty podcast, she lives in Florida.
Loading...
or support indie stores by buying on