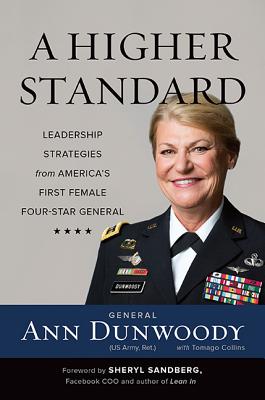 On June 23, 2008, President George W. Bush nominated Ann Dunwoody as a four-star general in the US Army-the first time a woman had ever achieved that rank. The news generated excitement around the world. Now retired after nearly four decades in the Army, Dunwoody shares what she learned along the way, from her first command leading 100 soldiers to her final assignment, in which she led a 60 billion enterprise of over 69,000 employees, including the Army's global supply chain in support of Iraq and Afghanistan.

What was the driving force behind Dunwoody's success? While her talent as a logistician and her empathy in dealing with fellow soldiers helped her rise through the ranks, Dunwoody also realized that true leaders never stop learning, refining, growing, and adapting. In A Higher Standard, Dunwoody details her evolution as a soldier and reveals the core leadership principles that helped her achieve her historic appointment. Dunwoody's strategies are applicable to any leader, no matter the size or scope of the organization. They include lessons such as "Never Walk by a Mistake," a mandate to recognize when something is wrong, big or small, and to hold people accountable. Not only can this save billions for industry, it can
sometimes save the lives of soldiers and citizens. She also advises that "Leaders Aren't Invincible-Don't Try to Be": to be our best, we have to acknowledge our worst. And she encourages readers to "Leverage the Power of Diversity" by creating teams of people from different backgrounds to provide a broad range of ideas and devise the best-informed decisions.

With these and other guiding principles, A Higher Standard offers practical, tactical advice that everyone can use to lead and achieve with maximum success.

"General Dunwoody's book, A Higher Standard, provides inspiring military philosophy and on-the-ground leadership experience. There are powerful messages, and much to be learned from our United States Army's first female four-star general, who is a woman with a brilliant career on and off the battlefield. Challenge, change, and commitment flow from A Higher Standard! A must-read for all leaders in every sector."—Frances Hesselbein, President and CEO of The Frances Hesselbein Leadership Institute and 1998 Presidential Medal of Freedom Recipient

Inc.com, 4/13/15
“Dunwoody presents a list of leadership strategies that she learned during the course of her 37-year military career. These strategies work just as well in business and in life as they do in the U.S. Army.”

800-CEO-READ, 4/28/15
“A straight shooter who tells it like it is, [Dunwoody] is uniquely qualified to teach, inspire, empower and entertain readers of all ages.”

Internet Review of Books, 4/26/15
“Tells the story of a dedicated individual who strives and succeeds….I highly recommend this enjoyable and easy-to-read book to anyone interested in improving leadership skills or seeking encouragement to stretch toward a goal.”

"Ann Dunwoody served her country for 37 years, inspiring countless soldiers and citizens along the way with her many firsts. As this book shows, her commitment to and zeal for service haven't ended with her military retirement."—Walter Isaacson, President & CEO of The Aspen Institute and author of The Innovators

"An amazing, uplifting story—and an important one for us to learn from. Ann Dunwoody was our first female four–star general, not because she was a great female soldier, but because she was simply a great soldier. She drove change—blazing a trail through myriad challenges—and did it with extraordinary wisdom courage, and a selfless commitment to soldiers. An inspirational guidebook for anyone trying to make their team or organization better."—General Stanley McChrystal (U.S. Army, Retired), author of My Share of the Task and Team of Teams

The Bookworm Sez (syndicated column), 7/27/15
“You'll learn leadership tips from on and off the battlefield…You'll find a wealth of advice perfectly fit for business…Dunwoody's story is empowering and entertaining, and instructive to civilians unfamiliar with Army life…There's enough biography here to satisfy readers of the genre, and anyone aspiring for leadership will find that as well…If you're curious about the life of a history-maker, then put A Higher Standard at your service.”

Midwest Book Review, August 2015
“Offers practical, tactical advice that everyone can use to lead and achieve with maximum success…As impressively well written, organized and presented as Ann Dunwoody herself, A Higher Standard is as informed and informative an account as it is thoughtful and thought-provoking. A truly extraordinary story.”

Tampa Bay Times, 10/18/15
“Though a memoir, the book is very much a manual for business leaders. Dunwoody offers a variety of advice, from how to not let people slide to embracing diversity.”


Roanoke Times, 5/24/15
“This memoir chronicles not only the life of an extraordinary woman, but lays out a guideline for those who follow—either male or female, military or civilian. The rules she sets forth, learned and practiced through 38 years of unrelenting effort, though no guarantee of equal success, are surely a path to failure if their wisdom is brushed aside…In short, this book ought to be required reading for every basic leadership class.”

InfoDad, 5/28/15
“Ann Dunwoody became the first four-star female general in United States history when President George W. Bush nominated her to that rank in 2008. It was a remarkable accomplishment—just how remarkable becomes clear from A Higher Standard…There is plenty that is uplifting in her story. She stands for values that many now consider old-fashioned but without which there might never have been a United States, certainly not one as powerful as the nation is today…Dunwoody had a remarkable Army career, and a remarkably successful one; and her recounting of what she did and how she did it is engaging, involving and often fascinating.”

"[Dunwoody's] insight into how to create good relationships with superiors, peers, and subordinates and to earn their trust and respect is invaluable."—Lead with the Left

General Ann Dunwoody is the former commanding general of one of the Army's largest commands, the US Army Materiel Command. Now retired, she offers strategic insights to companies and corporate boards. In addition to becoming the first woman in US military history to achieve the rank of four-star general, she was also the first woman to command a battalion in the 82nd Airborne Division and Fort Bragg's first female general officer. Dunwoody was also the first woman to command the Combined Arms Support Command.

AnnDunwoody.com
Loading...
or
Not Currently Available for Direct Purchase