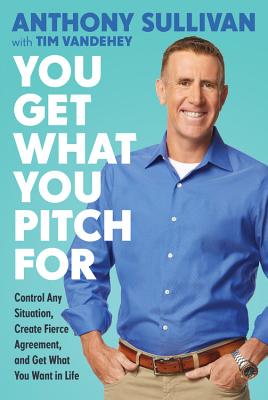 You Get What You Pitch For (Hardcover)

Control Any Situation, Create Fierce Agreement, and Get What You Want In Life

TV's most popular pitchman reveals the secrets of pitching to get what you want in virtually any situation.

Anthony "Sully" Sullivan went from selling car washers in rainy Welsh street markets to selling to audiences of millions around the world as the face of OxiClean. How did he do it?

Convincing people to give you what you want is an art form that takes charisma and confidence. But no great pitchman achieves success based on those quali­ties alone. The good ones make themselves great with practice and discipline, mastering a series of skills that Sullivan dubs the ten "Pitch Powers." These are essen­tial techniques he's learned in more than twenty-five years "on the joint" (that's pitchman-speak for the area where you're selling).

For the first time ever, Sullivan reveals the secrets behind his seemingly superhuman ability to persuade others--even if they start out regarding you with sus­picion or even hostility. Do it right and you'll change minds, open doors, get opportunities, turn adversar­ies into allies, make more money, and gain the kind of confidence that makes other people want to know you.

From the first Pitch Power ("Know Your Acceptable Outcomes") to the last ("Finish with Confidence")--with invaluable strategies along the way on using your flubs to get a laugh, how to deal with push-back, and more--Sullivan reveals that pitching is all about engaging a person face-to-face and eye-to-eye so they feel like you're speaking directly to them, even if there are fifty other people in the room. It's turning a crowd of strangers with their arms folded into a legion of fans ready to say "yes" enthusiastically to whatever you propose, what Anthony Sullivan calls fierce agree­ment. It's the power to get the job, get the girl (or guy), get the part, make money, get better service, advance your career--do just about anything you want to do.

Anthony Sullivan is an English entrepreneur and pitchman best known as the leading spokesman for the OxiClean brand. His production company, Sullivan Productions, Inc., produces TV commercials for consumer products.

Tim Vandehey is a bestselling ghostwriter and co-author. He lives in Kansas City, Missouri with his wife and daughters.


Praise For You Get What You Pitch For: Control Any Situation, Create Fierce Agreement, and Get What You Want In Life…

"When I'm managing, I have some favorite sayings: 'Do not permit the pressure to exceed the pleasure.' 'Be present, not perfect.' 'The moment you're worried about what people think about you...is the moment you stop being yourself.' They work for my kind of pitching--in baseball--and when you're attempting to persuade a player to try something new or different. Sully's captured that wisdom and a lot more in his terrific book. Check it out."—Joe Maddon, manager, 2016 World Champion Chicago Cubs

"If you want to get ahead in your career, your personal life, if you want to get funded or turn an idea into reality, read this book."—Barbara Corcoran, real estate mogul and star of ABC's Shark Tank

"Perfecting the art of the pitch is a major key to success. Every television show that I've produced had to be pitched in order for it to become a reality. Sully has mas­tered the art of the pitch. Now he is sharing his art with you."—Mark Burnett, executive producer of Survivor, The Apprentice, and The Voice


"Sully is hands down the best pitchman I have ever seen. As he shows in You Get What You Pitch For, Sully is the master of crafting the pitch!"—Thom Beers, three-time Emmy Award-winning producer and creator of the Discovery Channel's Deadliest Catch and Pitchmen

"Stage presence and performance is all about the pitch! How you sound, how you look. It's about making a connection with the audience...Sully nails the funda­mentals of what it takes to make a great pitch."—Randy Jackson, bassist, singer, record producer, music manager, and former judge on American Idol

"Sullivan seduces readers with his introduction-"a pitch is not a sell; it's connecting with another human being"-and proceeds to explain the how-tos of persuasion...The tips included in each chapter remind prospective pitch people about what matters."—Booklist
or
Not Currently Available for Direct Purchase
Copyright © 2020 American Booksellers Association