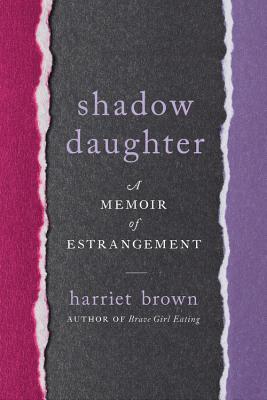 A Memoir of Estrangement

A riveting, provocative, and ultimately hopeful exploration of mother-daughter estrangement, woven with research and anecdotes, from an award-winning journalist.

The day of her mother's funeral, Harriet Brown was five thousand miles away. For years they'd gone through cycles of estrangement and connection, drastic blow-ups and equally dramatic reconciliations. By the time her mother died at seventy-six, they hadn't spoken at all in several years. Her mother's death sent Brown on a journey of exploration, one that considered guilt and trauma, rage and betrayal, and forgiveness.

Shadow Daughter tackles a subject we rarely discuss as a culture. Family estrangements -- between parents and children, siblings, multiple generations -- are surprisingly common, and even families that aren't officially estranged often have some experience of deep conflicts. Despite the fact that the issue touches most people one way or another, estrangement is still shrouded in secrecy, stigma, and shame. We simply don't talk about it, and that silence can make an already difficult situation even harder. Brown tells her story with clear-eyed honesty and hard-won wisdom; she also shared interviews with others who are estranged, as well as the most recent research on this taboo topic.

Ultimately, Shadow Daughter is a thoughtful, provocative, and deeply researched exploration of the ties that bind and break, forgiveness, reconciliation, and what family really means.

Praise For Shadow Daughter: A Memoir of Estrangement…

"Brown's research and anecdotes help readers understand the many dilemmas involved in engaging in estrangement and offer support for those balancing on the edge of making this life-changing decision."—Kirkus Reviews

"For anyone who's had a difficult relationship with a family member (read: literally everyone), journalist Harriet Brown's Shadow Daughter should be required reading. In this look at the cultural norms (and stigma) around estrangement, Brown details her relationship with and separation from her own mother, weaving personal anecdote with expert research and interviews with others estranged from their family members."—Buzzfeed

Harriet Brown is the author of Body of Truth and Brave Girl Eating. She has edited two anthologies and has written for the New York Times Magazine, O Magazine, Psychology Today, Prevention, and many other publications. She is an associate professor of magazine journalism at the S.I. Newhouse School of Public Communications at Syracuse University.

1. Chapter 1 explores the social, emotional, and biological factors that keep families together. Given those powerful forces, do you think estrangement can ever be a positive option?

2. Throughout the book, Harriet talks about the experience of estrangement from both the estranger and estrangee’s experiences. How will the book be read by those two audiences? Is it possible to have empathy for both estrangers and estrangees?

3. Chapter 4 talks about “The Myth of the Worst-Case Scenario”; what are some of the most common reasons for estrangement?

4. Do you think it’s possible to overcome an abusive relationship with family members?

5. On page 163, Harriet writes, “A wise therapist once told me that when your parents don’t give you their blessing you must learn to bless yourself. The problem is that without their blessing you are dumb, stuck in the vocabulary of childhood: I want. I need. I hurt. You don’t have, or don’t believe you have, the ability to calm yourself, to release yourself into the world, into your life.” What does she mean by that, and how does it connect to estrangement?

6. We live in a culture where we’re used to thinking that love can solve any problem. Many of the estranged people interviewed in the book say they love their family members but still choose estrangement. What role does love play in estrangement?

7. On page 50, Harriet writes, “I planned to never have children, though. I was terrified that I would inadvertently do to them what my mother had done to me, and afraid, too, that my mother’s ill wish would come true. Then my grandmother died and the need to have a child bloomed in me like a magnolia flower…I was pregnant two weeks later and the next nine months stretched, endless and full of worries. What if the child I carried found me selfish and cold and unworthy of love just as my mother had? What if I didn’t love it enough or in the right way? What if my child filled me with rage as I seemed to do with my mother? What if my mother’s curse came true?” What is the legacy of estrangement?

8. The book tells stories of dozens of people who have dealt with estrangement in one way or another. Which of those stories stood out to you? Why?

9. Chapter 8 talks about forgiveness and reconciliation. What role does forgiveness play in estrangement? Can you forgive someone and still stay estranged?

10. At the end of the book, Harriet finds herself in the unexpected position of caring for her elderly father and developing a new relationship with him. What does this resolution say about estrangement and families?