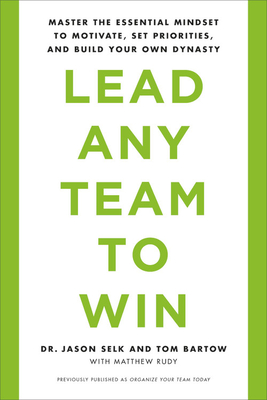 Lead Any Team to Win

Master the Essential Mindset to Motivate, Set Priorities, and Build Your Own Dynasty

"One of the ten best leadership books so far this year." -- Bloomberg

Watch a triumphant speech after a sports championship or business milestone and you'll almost always hear some variation of this catchphrase: "It couldn't have happened without the great team we have." It doesn't matter if you're the owner of a 10,000-employee Fortune 500 company or running a small business, you're a part of a team. With a combined 50 years of experience building, managing, advising, and troubleshooting teams in both the business and sports worlds, Jason Selk and Tom Bartow now reveal the common DNA that links the highest performing teams.

In Organize Your Team Today, Selk and Bartow show how it takes collective mental toughness to win, developed only through a clear understanding of the goals, limitations, roles and personalities on your team. Great leaders respect and embrace channel capacity, Selk and Bartow explain, which means they don't overload their teams with blizzards of tasks and responsibilities. They bust the "focus" and "relationship" fallacies, as those words are meaningless for teams unless they are byproducts of activities that really matter. And Selk and Bartow teach how to manage expectations, since doing so creates a level of respect between the leader and the team -- and among the team members--that is a catalyst for peak achievement.

Praise For Lead Any Team to Win: Master the Essential Mindset to Motivate, Set Priorities, and Build Your Own Dynasty…

"Far too many corporate executives confuse 'Goal Setting" with true leadership. These authors bring into focus the specific techniques necessary to guide each individual corporate team member toward the accomplishment of a well-defined goal. Their comparison of the use of techniques to that of sports team development is enlightened and on point. This book is truly a roadmap for the executive at any level."—Gerald C. Mansfield, President, CEO, United Facility Development, Inc.

"Mental toughness is a critically important component of individual performance, and that importance is only magnified if you're a leader. This book is the manual for the mental game of leadership. Read it, use the principles, and win!"—Roger Seip, author of Train Your Brain for Success

"Our minds are overloaded with to-dos. The idea of honoring your team and your own Channel Capacity is simple and relaxing at the same time. If you and your team are overwhelmed, [Lead Any Team to Win] is the place to start."—Robbin Phillips, Courageous President, Brains on Fire, coauthor of Brain on Fire and The Passion Conversation

"Techniques for ensuring winning strategies make for an engrossing discussion highly recommended for anyone who wants a team approach to success."—Donovan's Bookshelf

Matthew Rudy has ghostwritten twenty-six sports, business, and travel books since 1997, including titles by golf instructors Dave Stockton, Hank Haney, and Stan Utley; sports psychiatrist Dr. Michael Lardon, and personal development coach Bryan Dodge. His book with personal finance expert Anthony Davenport was published by Houghton Mifflin Harcourt in 2017. He is a senior writer at Golf Digest, where he has ghostwritten twenty-five cover stories since 1999 and earned national awards for his investigative and feature work.
Loading...
or support indie stores by buying on