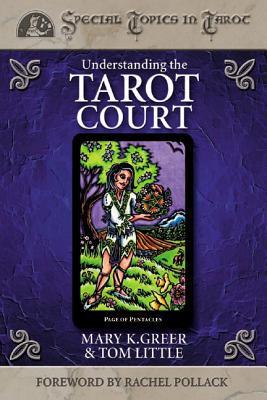 Just who are those kings, queens, knights, and pages in the Tarot deck? Generally considered the most difficult part of the Tarot to interpret, they actually represent different characters or personalities that are aspects of ourselves. They also serve as teachers or projections of our own unacknowledged qualities.

Two esteemed Tarot scholars unmask the court cards with details not found in any other book. Discover your significator and your nemesis. Compare the differences among the cards in well-known decks. Match the court cards with the zodiac signs, the Myers-Briggs personality types, and the Jungian archetypes. Learn a variety of spreads that reveal childhood issues, career destiny, and a storytelling spread to spark the creative writing process.

Mary Greer is an author and teacher specializing in methods of self-exploration and transformation. A Grandmaster of the American Tarot Association, she is a member of numerous Tarot organizations, and is featured at Tarot conferences and symposia in the United States and abroad. Mary also has a wide following in the women's and pagan communities for her work in women's spirituality and magic. A Priestess-Hierophant in the Fellowship of Isis, she is the founder of the Iseum of Isis Aurea. Mary has studied and practiced Tarot and astrology for over 34 years. Her teaching experience includes eleven years at New College of California, as well as at many workshops, conferences, and classes. She is the founder and director of the learning center T.A.R.O.T. (Tools and Rites of Transformation). Her books include Tarot for Your Self: A Workbook for Personal Transformation (1984); Tarot Constellations: Patterns of Personal Destiny (1987); Tarot Mirrors: Reflections of Personal Meaning (1988); The Essence of Magic: Tarot, Ritual, and Aromatherapy (1993); Women of the Golden Dawn: Rebels and Priestesses (1995); and Aromatherapy: Healing for the Body and Soul (1998), with Kathi Keville. Tom Tadfor Little is a health physicist at Los Alamos National Laboratory. He holds a PhD in astronomy from New Mexico State University and has previously worked as a university professor and a technical writer. He is a Wiccan priest and teacher, and dean of the School of Magickal Arts at Ardantane (http: //www.ardantane.org). He has used the tarot as his primary spiritual tool for a number of years, and has a strong interest in tarot history and antique decks. He has contributed to the internet tarot community, and has created extensive online resources for tarot enthusiasts, including The Hermitage (a tarot history site, (http: /www.crosswinds.net/ hermit/) and Tarot at Telperion Productions (http: //www.telp.com/tarot/). He co-authored and edited the TarotL Tarot History Information sheet. Tom lives in Santa Fe, New Mexico, with his 8-year-old daughter Anne-Marie.
Loading...
or support indie stores by buying on