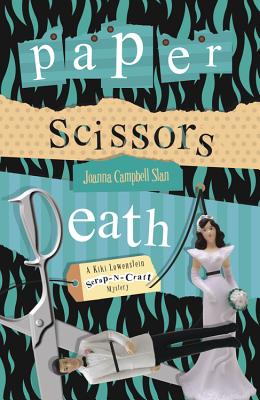 Every scrapbook tells a story. Memories of friends, family . . .
and murder?

Mousy housewife Kiki Lowenstein has two great loves: scrapbooking and her young daughter, Anya. But her happy family album is ruined when her husband, George, is found naked and dead in a hotel room. As Kiki tracks down George's murderer, she discovers his sordid secret life.

Cruel taunts by George's former flame compel Kiki to spout an unwise threat. When the woman is murdered, Kiki's scissor-sharp words make her the prime suspect. She could be creating scrapbook keepsakes for the rest of her life-behind bars. Supported by her loyal friends, along with a little help (and a lot of stomach flutters) from the dashing Detective Detweiler, can Kiki cut the true killer out of the picture and design a new life for herself and Anya?

Includes expert scrapbooking tips and techniques, and a coupon for free Snapfish photos

Joanna Campbell Slan (Washington, D.C.) is an international authority in the scrapbooking community. She is the author of over ten books on the subject, and her work has appeared in all of the industry's top magazines. In 2004, Slan founded a contest for scrapbookers in the U.K called "The Best of British Scrapbooking," which still runs today. Additionally, Joanna is one of the early Chicken Soup for the Soul authors, and in 2007, she co-founded Sisters in Crime's Forensic University of St. Louis.
or
Not Currently Available for Direct Purchase
Copyright © 2020 American Booksellers Association