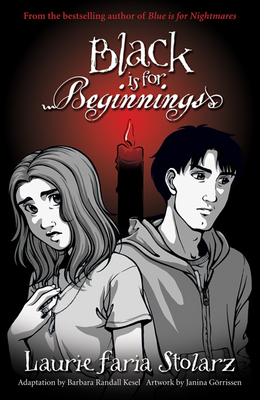 Black Is for Beginnings (Blue Is for Nightmares #5)

It's happening again... The BLUE IS FOR NIGHTMARES series that put a spell on more than half a million readers continues - in graphic novel format Prophetic dreams. Near-brushes with death. Killers pursuing her and her friends. Stacey Brown knows that being a hereditary witch isn't all it's cracked up to be. Stacey's nightmares are back. And all she wants to do is go to Colorado and work things out with Jacob, who hasn't been able to remember her since he lost his memory in his brush with death. But before Stacey and Jacob can have a future, they must face their pasts. Black is for Beginnings reveals the never-before-seen backstory--and what lies ahead--for the young, spellcasting lovers. Praise for the Blue is for Nightmares series: - A 2007 YALSA Popular Paperback- A 2005 YALSA Quick Pick- A 2004 YALSA Teen Top Ten Nominee.

Laurie Faria Stolarz (Massachusetts) has a great interest in teen culture, and admires young adults for their passion, energy, and creativity. Blue is for Nightmares is the product of her desire to write a novel that would have appealed to herself at that age, namely one that has a blending of suspense, romance, and the art of keeping secrets.Stolarz has an MFA in Creative Writing with a concentration in Young Adult Literature from Emerson College in Boston. She currently teaches writing and is a member of the SCBWI as well as several professional writing groups.
Loading...
or
Not Currently Available for Direct Purchase