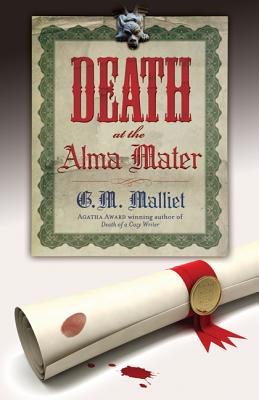 St. Michael's College, Cambridge, is prestigious, stately-and in frightful disrepair. To replenish its dwindling coffers, the College's Master holds a fundraising weekend for wealthy alums. But all goes awry when the glamorous-and despised-Lexy Laurant is found strangled on the grounds. There's a lengthy list of likely suspects: Lexy's debt-ridden Latino lover, her titled ex-husband who left her for another woman, and a garrulous oil-rich Texan with something to hide, among others. As Detective Chief Inspector St. Just weighs clashing egos, he discovers unsavory secrets . . . and a most shocking twist.

Praise: "This third in the series is every bit as good as its predecessors. Longtime cozy fans will be reminded of Golden Age classics starring Dorothy Sayers' Harriet Vane and Edmund Crispin's Gervase Fen."--Booklist (starred review) "G.M. Malliet presents a meticulous novel with sophistication and uncomplicated restraint. She keeps mystery fans guessing without thrusting overwhelming or unnecessary detail into her well-researched scenes."--ForeWord "Fans of Dorothy Sayers's novels and other Golden Age British mysteries will enjoy this contemporary salute, which even includes the traditional gathering of suspects at the end when the detective reveals all."--Library Journal "A witty third cozy."--Publishers Weekly "It certainly shouldn't be missed."--Reviewing the Evidence

G. M. Malliet's first St. Just mystery won the 2008 Agatha Award for Best First Novel, and was chosen by Kirkus Reviews as a best book of the year. It was nominated for several awards, including the Anthony, the Macavity and a Lefty Award for best police procedural. Her series from Minotaur featuring a former MI5 Agent turned vicar of a small English village debuted in Autumn of 2011. Of the fourth book in the series, Cleveland.com raved: "[Malliet] may be the best mystery author writing in English at the moment (along with Tana French). She's certainly the most entertaining." She attended graduate school in Cambridge and Oxford; she and her husband travel frequently to the UK, the setting for her books. Weycombe is her first book of dark suspense. You can visit her at www.GMMalliet.com.
or
Not Currently Available for Direct Purchase
Copyright © 2020 American Booksellers Association