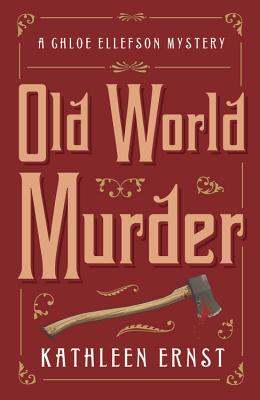 Trying to leave painful memories behind her, Chloe Ellefson is making a fresh start. She's the new collections curator at Old World Wisconsin, an outdoor ethnic museum showcasing 1870s settlement life. On her first day, Chloe meets with an elderly woman who begs her to find a priceless eighteenth-century Norwegian ale bowl that had been donated to the museum years ago. But before Chloe can find the heirloom and return it to her, the woman dies in a suspicious car crash.

Digging up the history and whereabouts of the rare artifact quickly turns dangerous. Chloe discovers that someone is desperately trying to cover up all traces of the bowl's existence--by any means necessary. Assisting Chloe is police officer Roelke McKenna, whose own haunting past compels him to protect her. To catch the covetous killer, Chloe must solve a decades-old puzzle . . . before she becomes a part of history herself.

Praise: "Clever plot twists and credible characters make this a far from humdrum cozy."--Publishers Weekly "This series debut by an author of children's mysteries rolls out nicely for readers who like a cozy with a dab of antique lore. Jeanne M. Dams fans will like the ethnic background."--Library Journal "Information on how to conduct historical research, background on Norwegian culture, and details about running an outdoor museum frame the engaging story of a woman devastated by a failed romantic relationship whose sleuthing helps her heal."--Booklist "Old World Murder is strongest in its charming local color and genuine love for Wisconsin's rolling hills, pastures, and woodlands...a delightful distraction for an evening or two."--New York Journal of Books "A wonderfully-woven tale that winds in and out of modern and historical Wisconsin with plenty of mysteries--both past and present. In curator Chloe Ellefson, Ernst has created a captivating character with humor, grit, and a tangled history of her own that needs unraveling. Enchanting "--Sandi Ault, author of the WILD Mystery Series and recipient of the Mary Higgins Clark Award

"Propulsive and superbly written, this first entry in a dynamite new series from accomplished author Kathleen Ernst seamlessly melds the 1980's and the 19th century. Character-driven, with mystery aplenty, Old World Murder is a sensational read. Think Sue Grafton meets Earlene Fowler, with a dash of Elizabeth Peters."--Julia Spencer-Fleming, Anthony and Agatha Award-winning author of I Shall Not Want and One Was A Soldier

Kathleen Ernst is an award-winning and bestselling author, educator, and social historian. She has published over thirty novels and two nonfiction books. Her books for young readers include the Caroline Abbott series for American Girl. Honors for her children's mysteries include Edgar and Agatha Award nominations. Kathleen worked as an Interpreter and Curator of Interpretation and Collections at Old World Wisconsin, and her time at the historic site served as inspiration for the Chloe Ellefson mysteries. The Heirloom Murders won the Anne Powers Fiction Book Award from the Council for Wisconsin Writers, and The Light Keeper's Legacy won the Lovey Award for Best Traditional Mystery from Love Is Murder. Ernst served as project director/scriptwriter for several instructional television series, one of which earned her an Emmy Award. For more information, visit her online at KathleenErnst.com.
or support indie stores by buying on
Copyright © 2020 American Booksellers Association