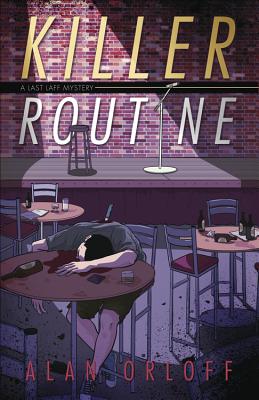 Comedian Channing Hayes survived a tragic auto accident that claimed the life of his fiancée, Lauren. Physically and emotionally scarred, he’s put his performing career on hold, resigned to getting laughs vicariously as co-owner of The Last Laff Comedy Club. There, he instructs Lauren’s sister Heather in the fine art of stand-up. When Heather skips out on her set during the club’s comedy showcase, Channing searches for his AWOL protégée. Then Heather’s ex-lovers start turning up dead—and Channing must fight to keep Heather from being the next hit in this deadly line-up.

Alan Orloff is a member of Mystery Writers of America, International Thriller Writers and The Writer's Center in Bethesda, Md. He is the author of Diamonds for the Dead, an Agatha Award finalist for Best First Novel, and Killer Routine. Orloff earned a B.S. from the University of Maryland and an M.B.A. from MIT/Sloan. He resides in northern Virginia. For more information, visit him online at: AlanOrloff.com.
Loading...
or
Not Currently Available for Direct Purchase