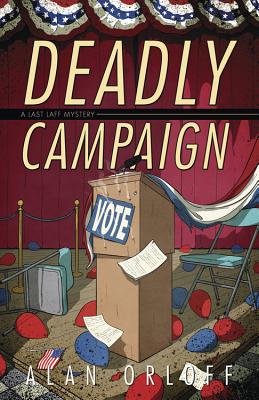 Comedy club owner and occasional performer Channing Hayes thought the comedy biz was tough, but it’s a stroll in the park compared to politics. When he and his business partner Artie attend a congressional campaign event for their friend Thomas Lee’s nephew, masked thugs storm in and break up Lee’s restaurant with baseball bats. The candidate’s people insist that the police not be involved, so Lee asks Channing to investigate. As Channing searches for answers, he finds himself plunged into a corrupt world of payoffs, gangs, illicit affairs, blackmail—and murder.     A New Last Laff Mystery from Agatha Award-Nominated Author Alan Orloff

Alan Orloff is a member of Mystery Writers of America, International Thriller Writers and The Writer's Center in Bethesda, Md. He is the author of Diamonds for the Dead, an Agatha Award finalist for Best First Novel, and Killer Routine. Orloff earned a B.S. from the University of Maryland and an M.B.A. from MIT/Sloan. He resides in northern Virginia. For more information, visit him online at: AlanOrloff.com.
Loading...
or
Not Currently Available for Direct Purchase