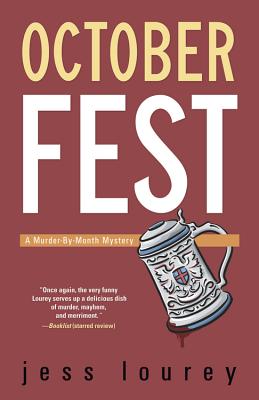 Beer and polka music reign supreme at Octoberfest, Battle Lake's premier fall festival. To kick off the celebrations, the town hosts a public debate between the two congressional candidates: straight-laced Arnold Swydecker, and slippery incumbent, Sarah Glokkmann. As a reporter for the Battle Lake Recall, Mira James is roped into writing up the word war. But the festive mood sours when a well-known Glokkmann-bashing blogger is found dead . . . and the congresswoman herself meets a gruesome fate.

To keep the heat off her best friend's fianc --an ex-con reporter--Mira wades through the candidates' dirty laundry, their unsavory secrets, and some murderous mudslinging to expose the killer.

"With snappy jokes and edgy dialog, Lourey brings a Gen-X tone to a traditional mystery. The classic romance setup and her effective handling of eldercare issues enhance a clever plot. More spunky than sweet; get started on this Lefty-nominated series if you've previously missed it."--Library Journal (starred review)

"Lourey has cleverly created an entertaining murder mystery with the most unlikely murder accomplice ever. Her latest is loaded with humor, and many of the descriptions are downright poetic."--Booklist (starred review)

"The story is funny, ribald and brimming with small-town eccentrics."--Kirkus Reviews

"I loved Lourey's quirky, appealing sleuth and her wry yet affectionate look at small town life. No gimmicks, just an intriguing plot with oddball characters. I hope Mira's misfortune of stumbling over a dead body every month lasts for many years "--Donna Andrews, New York Times bestselling author of Stork Raving Mad

Jessica (Jess) Lourey is best known for her critically-acclaimed Murder-by-Month mysteries, which have earned multiple starred reviews from Library Journal and Booklist, the latter calling her writing "a splendid mix of humor and suspense." A tenured professor of creative writing and sociology, Jess lives in Minneapolis with her family. Salem's Cipher, the first book in her thrilling Witch Hunt series, hits stores September 2016. You can find out more at www.JessicaLourey.com.
or
Not Currently Available for Direct Purchase
Copyright © 2020 American Booksellers Association