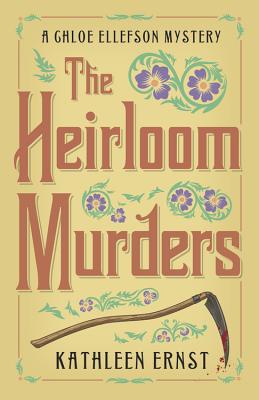 As collections curator for Old World Wisconsin, Chloe Ellefson delights in losing herself in antiques and folk traditions--and forgetting her messy love life. But her peace is destroyed when her ex-boyfriend unexpectedly turns up, followed by a break-in at her friend Dellyn's historic house--a potential treasure trove of priceless antiques. Was the intruder hunting for the missing Eagle Diamond, a legendary gemstone unearthed in 1876?

When a grisly murder takes place on the museum grounds, Chloe is further drawn into a mystery involving a rare variety of Swiss cheese, a nearly extinct heirloom flower...and plain, old-fashioned murderous greed.

Winner of the 2011 Anne Powers Fiction Prize from the Council for Wisconsin Writers.

"Chloe is an appealing character, and Ernst's depiction of work at a living museum lends authenticity and a sense of place to the involving plot."--St. Paul Pioneer Press

"Greed, passion, skill, and luck all figure in this surprise-filled outing."--Publishers Weekly