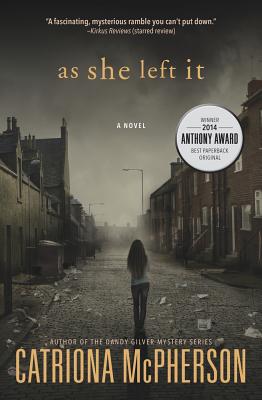 As She Left It

When she was twelve years old, Opal Jones escaped her mother's endless drinking. Now, returning to their small Leeds cottage after her mum's death, Opal feels like she's gone back in time. Nosey Mrs. Pickess is still polishing her windows to a sparkle. Fishbo, Opal's ancient music teacher, still plays trumpet with his band. And much to Opal's delight, her favorite neighbor, Margaret Reid, still keeps an eye on things from the walk in front of her house.

But a tragedy has struck Mote Street. Margaret's grandson, Craig, disappeared some ten years ago, and every day he's not found, shame and sorrow settle deeper into the neighborhood's forgotten corners. As the door she closed on her own dark past begins to open, Opal uncovers more secrets than she can bear about the people who were once her friends.

Winner of the 2014 Anthony Award for Best Paperback Original

Winner of the 2013 Gold ForeWord IndieFab Award for Mystery

Named one of Kirkus Reviews'"Best Books of 2013"

"The creator of Dandy Gilver...has produced a stand-alone that is worlds apart, a fascinating, mysterious ramble you can't put down."--Kirkus Reviews (starred review)

" A] captivating stand-alone from the author of the Dandy Gilver mystery series."--Booklist

"McPherson has crafted a tale that is both suspenseful and poignant. I wanted to cheer for Opal one second and hug her the next."--Eileen Rendahl, author of The Messenger Novels

Catriona McPherson was born in Edinburgh, Scotland, and is the author of several standalone novels for Midnight Ink. She is a four-time winner of the Lefty Award, three-time winner of the Macavity Award, two-time winner of the Agatha Award, and two-time winner of the Anthony Award. Additionally, she has been a finalist or shortlist honoree for more than a dozen major awards. Catriona also writes the Dandy Gilver historical mystery series (Minotaur/Thomas Dunne Books). She is the past president of Sisters in Crime and a member of Mystery Writers of America. She lives in Davis, California.
Loading...
or
Not Currently Available for Direct Purchase