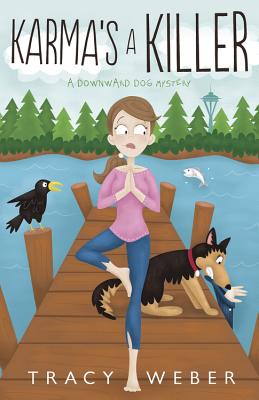 When Seattle yoga teacher Kate Davidson agrees to teach doga (yoga for dogs) at a fundraiser for a local animal shelter, she believes the only damage will be to her reputation. But a few downward-facing dogs are the least of Kate's problems when an animal rights protest at the event leads to a suspicious fire and a drowning.

The police arrest Dharma, a woman claiming to be Kate's estranged mother, and charge her with murder. To prove Dharma's innocence, Kate, her boyfriend Michael, and her German shepherd sidekick Bella dive deeply into the worlds of animal activism and organizational politics. As they investigate the dangerous obsessions that drive these groups, Kate and her sleuthing team discover that when it comes to murder, there's no place like hOMe.

"Weber's clever assemblage of suspects is eliminated one by one in her entertaining novel."--RT Book Reviews

" Weber's] characters are likeable and amusing, the background is interesting, and the story is ultimately satisfying."--Ellery Queen Mystery Magazine

"A wonderful story for dog lovers, with the other human characters being just as likeable."--Suspense Magazine

"Crazy, quirky critters and their odd, yet utterly relatable human counterparts, make Karma's a Killer an appealing story. But when you add the keep-you-guessing mystery with both laugh out loud one liners and touching moments of pure poignancy the result is a truly great book "--Laura Morrigan, national bestselling author of the Call of the Wilde mystery series

"Tracy's Weber's Karma's a Killer delivers on all fronts--a likably feisty protagonist, a great supporting cast, a puzzler of a mystery and, best of all, lots of heart."--Laura DiSilverio, national bestselling author of The Readaholics Book Club Mysteries, two-time Lefty Finalist for Best Humorous Mystery and Colorado Book Award-finalist

"Yogatta love this latest in the series when Kate exercises her brain cells trying to figure out who deactivated an animal rights activist."--Mary Daheim, author of the Bed-and-Breakfast and Emma Lord Alpine Mysteries

Tracy Weber is author of the award-winning Downward Dog Mystery series. Her first book in the series, Murder Strikes a Pose, won the Maxwell Award for Fiction and was nominated for the Agatha Award for Best First Novel. A certified yoga therapist, Tracy is the owner of Whole Life Yoga, a Seattle yoga studio, and she loves sharing her passion for yoga and animals in any way possible. Tracy and her husband Marc live in Seattle with their precocious German Shepherd pup Ana. When she's not writing, Tracy spends her time teaching yoga, trying to corral Ana, and sipping Blackthorn cider at her favorite ale house.
or
Not Currently Available for Direct Purchase