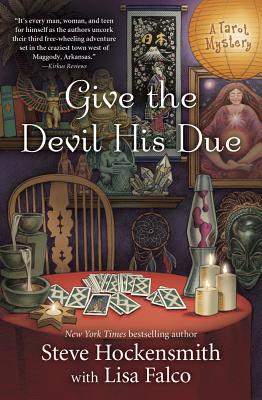 Give the Devil His Due (Tarot Mystery #3) (Paperback)

Alanis McLachlan, reformed con artist turned tarot reader, gets paid for predicting the future--too bad she didn't see all the trouble in hers. First a figure from her past tries to drag her back into the life of crime she thought she'd le behind. Then a new suitor tries to sweep Alanis off her feet, threatening her on-again, off-again romance with hunky teacher Victor Castellanos. And there's the little matter of the ominous reading she gives to a new client, which could have deadly consequences. Danger is in the cards for Alanis, and she'll need all her skills at reading both people and tarot if she's going to survive.

"It's every man, woman, and teen for himself as the authors unlock their third free-wheeling adventure set in the craziest town west of Maggody, Arkansas."--Kirkus Reviews

" A] quirky series . . . filled with eccentric protagonists and engaging banter, insights into the art of grift, and tantalizing love interests. Apt to appeal to Jim Swain fans and lovers of Janet Evanovich and Lee Goldberg's 'Fox and Hare' series."--Library Journal

"A perfect, frothy confection, swirls to an ending suitable to the entire enterprise. Hockensmith is a worthy heir to the late, lamented Donald E. Westlake."--Mystery Scene

Steve Hockensmith (California) is the author of the Pride and Prejudice and Zombies novels Dawn of the Dreadfuls (Quirk Classics, 2010) and Dreadfully Ever After (Quirk Classics, 2011). His book Holmes on the Range (Minotaur Books, 2007) was a finalist for the Edgar, Shamus, and Anthony Awards for Best First Novel. Lisa Falco (Los Angeles) received her first tarot deck at the age of eight years old. She holds degrees from both Northwestern University and Cal State University Northridge, and is the author of A Mother's Promise (Illumination Arts, 2004).
or
Not Currently Available for Direct Purchase
Copyright © 2020 American Booksellers Association