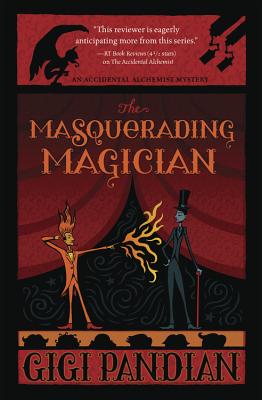 Deciphering an ancient alchemy book is more difficult than Zoe Faust bargained for. She'd much rather be gardening and exploring her new hometown of Portland, Oregon--but time is running out for living gargoyle Dorian Robert-Houdin. If Zoe isn't able to unlock an unusual alchemy book's secrets soon, the French gargoyle will remain awake but trapped in stone forever.

When Zoe gives herself a rare night out to attend a classic magic show, she realizes the stage magicians are much more than they seem. A murder at the theater leads back to a string of unsolved robberies and murders in Portland's past, and a mystery far more personal than Zoe and Dorian ever imagined.

The Masquerading Magician] is enjoyable and holds together quite nicely.--Reviewing the Evidence

USA Today bestselling and Agatha Award-winning author Gigi Pandian is the child of cultural anthropologists from New Mexico and the southern tip of India. She spent her childhood being dragged around the world on their research trips, and now lives outside San Francisco with her husband and a gargoyle who watches over the garden. Gigi writes the Jaya Jones Treasure Hunt mysteries, Accidental Alchemist mysteries, and locked-room mystery short stories.
Loading...
or
Not Currently Available for Direct Purchase