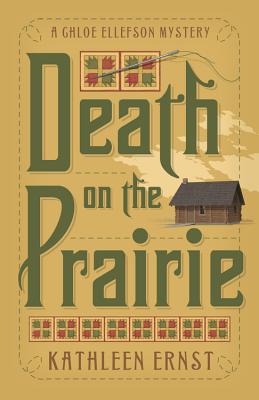 Chloe Ellefson and her sister, Kari, have long dreamed of visiting each historic site dedicated to Laura Ingalls Wilder. When Chloe takes custody of a quilt once owned by the beloved author, the sisters set out on the trip of a lifetime, hoping to prove that Wilder stitched it herself.

But death strikes as the journey begins, and trouble stalks their fellow travelers. Among the Little House devotees are academic critics, greedy collectors, and obsessive fans. Kari is distracted by family problems, and unexpected news from Chloe's boyfriend jeopardizes her own future. As the sisters travel deeper into Wilder territory, Chloe races to discover the truth about a precious artifact--and her own heart--before a killer can strike again.

Fans of Laura Ingalls Wilder will savor the facts...Ernst does an exceptional job of sharing the kinds of character details that cozy readers relish.--Booklist

A real treat for Little House fans, a fine mystery supplemented by fascinating information on the life and times of Laura Ingalls Wilder.--Kirkus Reviews

The sixth installment of this incredible series...is a super read that sparks the imagination.--Suspense Magazine

As superbly pieced together as a blue ribbon quilt, Death on the Prairie is deft and delightful, and you don't want to miss it --Molly MacRae, Lovey Award-winning author of the Haunted Yarn Shop Mysteries

Kathleen Ernst spins a delightful tale of intrigue that interweaves facts about Laura's life with fan folklore, and of course, murder. I give this book an enthusiastic two thumbs up --Linda Halpin, author of Quilting with Laura: Patterns Inspired by the Little House on the Prairie Series

Suspense, intrigue, trafficking in stolen artifacts, blackmail, murder: they're all here in this fast-paced mystery thriller.--John E. Miller, author of Becoming Laura Ingalls Wilder: The Woman Behind the Legend and Laura Ingalls Wilder's Little Town: Where History and Literature Meet