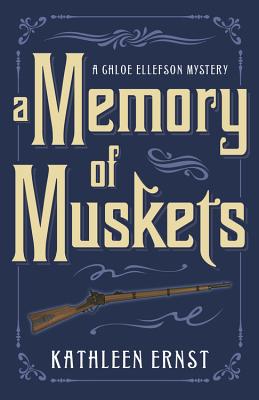 Curator Chloe Ellefson is happily planning to spotlight home-front challenges and German immigrants at Old World Wisconsin's first Civil War reenactment, but her overbearing boss scorns her ideas and proposes staging a mock battle instead. And when a reenactor is found dead at one of the historic site's German farms, Chloe's boyfriend, cop Roelke McKenna, suspects murder.

The more Roelke learns about reenacting, the more he fears that a killer will join the ranks. Then Chloe discovers a disturbing secret about Roelke's Civil War-era ancestors. Together they struggle to solve crimes past and present...before Chloe loses her job and another reenactor loses his life.

"Veteran Ernst provides a new perspective on the Civil War woven together with a compelling mystery." --Kirkus Reviews

"Kathleen Ernst knows how to spin a tale, weave an intricate plot, and hide clues in the embroidery. A Memory of Muskets takes two stories separated by more than a century and knits them together into one thoroughly satisfying read."--Kathy Lynn Emerson, Agatha Award-winning author of How to Write Killer Historical Mysteries, Murder in the Merchant's Hall, and other historical mysteries