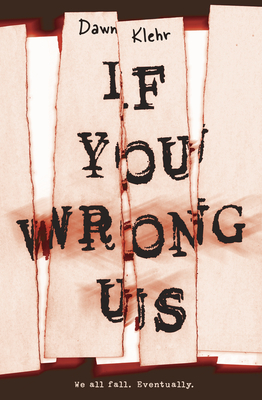 If You Wrong Us

After a car crash steals the lives of two people they love, Becca and Johnny become obsessed with a common cause. Officially, the crash is an accident. But Becca and Johnny are convinced: someone did this. As they plot revenge against the person responsible, a bond--intense, unyielding, and manic--takes hold of them. And in an unexpected turn of events, they fall for each other. Or so they think. In an upside-down world where decay is beautiful and love and hate become one, Becca and Johnny find themselves grappling with reality. Nothing is exactly what it seems, including what they've come to believe about the crash. The question is: will they learn the truth before it's too late? No, the question is: when they learn the truth, will they care?

Dawn Klehr (Twin Cities, MN) began her career in television, and though she's been on both sides of the camera, she now prefers to get lost in stories behind the lens. The Cutting Room Floor is her debut novel. Visit her online at http: //DawnKlehr.blogspot.com.
Loading...
or
Not Currently Available for Direct Purchase