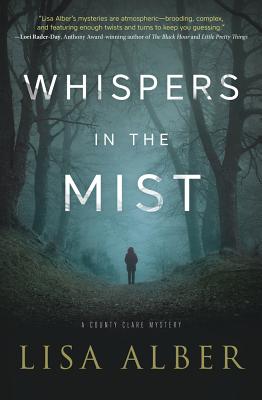 There's a whisper in the mists

In Lisfenora, Ireland, a strange fog has rolled in off the Atlantic. Along with the fog comes tales of the Grey Man, a predatory faery of local lore who snatches innocent souls into his deadly gloom.

And with the mists come murder

When a teenage boy dies in Detective Sergeant Danny Ahern's arms, Danny finds himself pursuing his own grey man, a killer who becomes more elusive the closer Danny gets to the truth. A mute woman may be the key to solving the murder and helping Danny heal his own broken life, but first she must unlock the memories from her past.

"A worthy successor to Kilmoon in tone, mood, complexity, and keen insight into human failures and triumphs."--Kirkus Reviews

"The struggles of Alber's] characters adds depth and power. A first-rate crime novel that will satisfy fans of Dicey Deere and Bartholomew Gill."--Library Journal

"Whispers in the Mist is evocative of the rolling hills and mystical beliefs of Ireland--as well as a brooding tale of murder . . . A complex and thrilling story about family, love and healing."--Crimespree Magazine

"Rich, dark, and complex--every aspect of Alber's second novel rises above the commonplace. The mystery's resolution is expertly teased from layers of motive, obligation, attraction and repulsion, all in a memorably atmospheric setting."--Sophie Littlefield, bestselling author of The Guilty One

Lisa Alber (Oregon), recipient of a grant from the Elizabeth George Foundation, contributed a short story on invitation to Two of the Deadliest (HarperCollins) alongside such notables as Laura Lippman, Dana Stabenow, and Patricia Smiley. She has been nominated for a Pushcart Prize, and she won a Walden Fellowship for writing. Lisa is an active member of Mystery Writers of America and Sisters in Crime. Kilmoon, the first in the County Clare Mystery series, was a Rosebud Award finalist for best debut novel.
Loading...
or
Not Currently Available for Direct Purchase