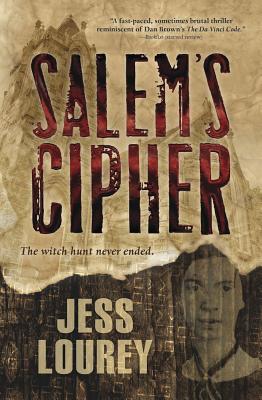 Salem Wiley is a genius cryptanalyst, courted by the world's top security agencies ever since making a breakthrough discovery in her field of quantum computing. She's also an agoraphobe, shackled to a narrow routine by her fear of public places. When her mother's disappearance is linked to a plot to assassinate the country's first viable female presidential candidate, Salem finds herself both target and detective in a modern-day witch hunt. Drawn into a labyrinth of messages encrypted by Emily Dickinson and centuries-old codes tucked inside the Beale Cipher, Salem begins to uncover the truth: an ancient and ruthless group is hell-bent on ruling the world, and only a select group of women stands in its way.

"The fascinating historical information combined with a storyline ripped from the headlines will hook conspiracy theorists and action addicts alike."--Kirkus Reviews

"This suspenseful tale has something for absolutely everyone to enjoy."--Suspense Magazine

"Fans of The Da Vinci Code are going to love this book."--Crimespree Magazine

Jessica (Jess) Lourey has earned multiple starred reviews from Library Journal and Booklist, the latter calling her writing a splendid mix of humor and suspense. A tenured professor of creative writing and sociology, Jess lives in Minneapolis with her family. She is the author of the critically acclaimed Murder-by-Month mysteries. You can find out more at www.JessicaLourey.com.
Loading...
or
Not Currently Available for Direct Purchase