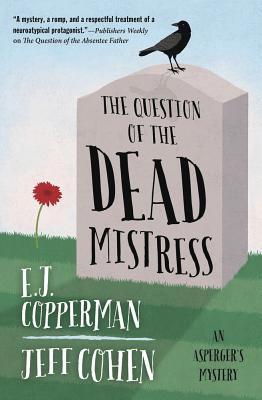 The Question of the Dead Mistress (Asperger's Mystery #5)

Readers will delight in watching Copperman's literal-minded hero grapple not only with unpredictable and nuanced human thinking, but with logic from beyond the grave.--Kirkus Reviews

Is my husband having an affair with a dead woman?

For Samuel Hoenig, the proprietor of a unique agency called Questions Answered, the answer to this most recent question is simple. Since there's absolutely no evidence that apparitions exist, it would be impossible for Ginny Fontaine's husband to be having an affair with one.

Wrestling with his complicated feelings for Ms. Washburn, Samuel proposes that she take the lead on the question. As soon as her research begins, the husband in question ends up dead, leaving Janet and Samuel wondering if they stand a ghost of a chance at unraveling this twisted tale of danger and deceit.

The first-person narration provides insights into the protagonist's logical, literal thought processes and his perplexity at emotional nuances and social subtleties. Series fans will appreciate the further development of Samuel's character.--Publishers Weekly