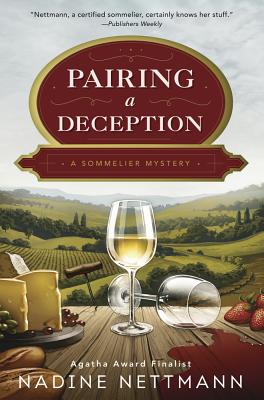 Katie is on Cloud Wine at a Santa Barbara Festival...until a new mystery is uncorked.

With only a few days left until her Advanced Sommelier exam, Katie Stillwell hopes to balance studying with attending a wine and food festival in Santa Barbara.

The weekend with Detective Dean is off to a great start--until an attendee is murdered and suspicion falls on the festival emcee, Master Sommelier Hudson Wiley. Katie tries to keep her focus on the festival and her last-minute studying, but when she discovers people aren't who they say they are, she finds herself in the middle of a tangled web where nothing, except the wine, is what it seems.

"This is another great tale in the Sommelier series. Kate becomes, yet again, involved in another murder case and it's her way of looking at things that makes this an entertaining drama that I could not put down until all was said and done. The author did a great job in staging this well-written mystery with a solid plot, plenty of suspects with strategically placed clues that kept me immersed in all that was happening."--Dru's Book Musings

"Whether you drink wine or not, Pairing a Deception is a quick read that will entertain. Fans of the series will be delighted to visit Katie again, and anyone new to the series will want to learn more about wine from Katie."--Carstairs Considers

Praise for the Sommelier Mysteries:
"A strong new series."--Mystery Scene

Nadine Nettmann, a Certified Sommelier through the Court of Master Sommeliers, is always on the lookout for great wines and the stories behind them. She has visited wine regions around the world including Chile, South Africa, Spain, Germany and every region in France. Nadine is a member of Mystery Writers of America, Sisters in Crime, and International Thriller Writers. She lives in California with her husband.
Loading...
or
Not Currently Available for Direct Purchase