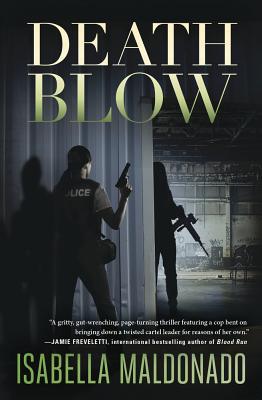 Homicide detective Veranda Cruz takes on the most ruthless member of the Villalobos cartel.

Phoenix homicide detective Veranda Cruz is on a mission. After Hector Villalobos tried to destroy her family, Veranda vowed to take down his powerful crime syndicate.

Beautiful, shrewd, and lethal, Daria Villalobos is on a mission of her own. Determined to be the first woman to take the reins of her father's notorious cartel, she hatches a plot to eliminate Veranda.

When the investigation blows up in Veranda's face, the hunt is on to stop a bomber. Veranda battles her department and her personal demons as she takes on Daria. To survive her most cunning adversary yet, will she make a pact with a killer?

Praise for Death Blow, Book 3 in the Veranda Cruz Mysteries:

If you're in the mood for a nonstop expos of every fear you've ever had about cartel crime, Veranda Cruz is the woman to follow.--Kirkus Reviews

Finally A kick-ass female protagonist and an author who knows firsthand the world she writes about. The combination makes for an explosive read that grabs you from page one and doesn't let go.--Alex Kava, New York Times and USA Today bestselling author of Lost Creed

Red alert to all readers of police procedurals with a strong thriller bent: Isabella Maldonado's Death Blow delivers non-stop action with substance, grit and surprises.--Lisa Preston, author of The Clincher

A gritty, gut wrenching, page-turning thriller featuring a woman cop bent on bringing down a twisted cartel leader for reasons of her own. Death Blow grabs you from the first jaw dropping scene to the last and Maldonado's stellar writing weaves it all together.--Jamie Freveletti, internationally bestselling author of Blood Run

Praise for Phoenix Burning, Book 2 in the Veranda Cruz Mysteries:

Maldonado's a writer to watch, and she showcases her own extensive law enforcement background in this tightly plotted police procedural.--Publishers Weekly (Starred Review)

Maldonado, a former law enforcement officer, brings her experience and expertise to this gripping police procedural. With its gritty heroine, this action-packed mystery will attract readers who enjoy crime novels about the war on drugs.--Library Journal

Phoenix may be burning, but Maldonado's star is rising. Gritty and gripping.--J. A. Jance, New York Times bestselling author

Delivers a brilliant and complicated heroine, accented by a take-no-prisoners plot...It's spicy, smart, and entertaining, definitely worth your time.--Steve Berry, author of The Lost Order

Praise for Blood's Echo, Book 1 in the Veranda Cruz Mysteries:

Winner of the 2018 Mariposa Award for Best First Novel

A highly entertaining police procedural...Maldonado rises to her written challenge to entertain, enthrall, and engage readers in this high-octane thriller.--Suspense Magazine

A tense thriller with a strong sense of place and an insider's look at some of the most dangerous work in law enforcement.--Jan Burke, New York Times bestselling author

An ex-narc leads a war against a powerful crime family. The payoff is satisfying.--Kirkus Reviews