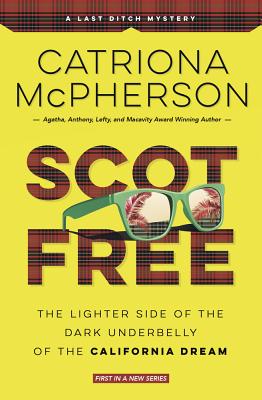 " McPherson's] character-driven romp is sparked by the larger-than-life, quirky residents of the Last Ditch Motel, putting this laugh-out-loud whodunit on a par with the early Janet Evanovich."--Library Journal (starred review)

Lexy Campbell fell in love and left her native Scotland for a golden life in California--hitched to a hunk, building her marriage counseling practice, living the dream. Six months later she's divorced, broke, and headed home. There's just one last thing. Lexy's only client--sweet little old Mrs. Bombarro--is in jail for murdering her husband with a fireworks rocket.

Lexy knows the cops have got it wrong; all she needs is a few days to prove it and somewhere cheap to sleep at night. But checking into the Last Ditch Motel brings an unexpected slice of life and a whole world of trouble.

"McPherson, a master of creepy psychological mysteries, shows an utterly different side of herself in this zany series kickoff."--Kirkus Reviews

"McPherson gives the fish-out-of-water theme a hilarious and original spin with Lexy Campbell, a Scottish therapist who falls for and marries a sexy California dentist who turns out to be more horndog than hero. Throw in a sweet old lady accused of blowing up her pyrotechnic husband and a hilariously bumbling supporting cast, and you have the perfect comic caper. Lexy is my new favorite unwitting detective and her cultural observations and mistakes are laugh-out-loud funny. Scot Free is a little sexy and a lot funny, with a heart and a bang."--Jess Lourey, Anthony and Lefty-nominated author

"The only times I stopped turning the pages were when I was laughing so hard it took both hands just to hold the book. McPherson is an ace plotter, a vivid, original stylist, and great company. A great beginning to a new series."--Timothy Hallinan, author of the Junior Bender series

"Everyone who knows me knows that I don't throw the word 'hoot' around lightly. So if I were to say that Catriona McPherson's new novel was a hoot, believe me, I would mean it. Filled with an entertaining cast of eccentric characters, Scot Free is a funny and original mystery. Quite frankly, it's a hoot. There, I said it."--Johnny Shaw, author of Big Maria and Imperial Valley

"Lexy's snide observations about the California lifestyle can't cover up her affection for her friends, who are as warm-hearted as they are weird. Readers will look forward to Lexy's further adventures."--Publishers Weekly

"McPherson, who has earned acclaim for her dark thrillers and Dandy Gilver period cozies, blends jaunty pacing, a comically rendered Southern California setting, and quirky characters in this series starter. A sure bet for fans of Janet Evanovich and Sarah Strohmeyer."--Booklist

Catriona McPherson was born in Edinburgh, Scotland, and is the author of several standalone novels for Midnight Ink. She is a four-time winner of the Lefty Award, three-time winner of the Macavity Award, two-time winner of the Agatha Award, and two-time winner of the Anthony Award. Additionally, she has been a finalist or shortlist honoree for more than a dozen major awards. Catriona also writes the Dandy Gilver historical mystery series (Minotaur/Thomas Dunne Books). She is the past president of Sisters in Crime and a member of Mystery Writers of America. She lives in Davis, California.
or support indie stores by buying on
Copyright © 2020 American Booksellers Association