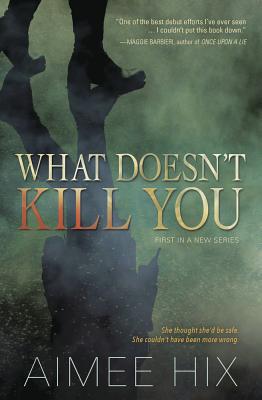 What Doesn't Kill You (Willa Pennington #1)

A favor for a friend turns into a murder investigation, drawing apprentice PI Willa Pennington into a labyrinth of lies and deception in the shadows of Washington, D.C.

But she couldn't have been more wrong.

Now, agreeing to do a simple favor has brought her to a dead body, a missing person, and a battle of wits with an old friend who has dangerous secrets. If Willa can keep her focus, she could solve the murder, find the missing girl, and figure out if the person she's trusted with her life is the one trying to end it.

One of the best debut efforts I've ever seen. Tight plotting, edge-of-your-seat suspense and a protagonist in PI Willa Pennington you'll want to read about again and again. I couldn't put this book down.--Maggie Barbieri, author of Once Upon a Lie

A debut that saddles tough-girl noir with the heart of a cozy.--Kirkus Reviews

This is a solid beginning to a character and setting that could go on to very good things.--RT Book Reviews

Aimee Hix is an up-and-coming author everyone should watch.--Crimespree Magazine

The book has plent of twists and surprises, but what stands out is the tight writing and fast narrative of the author's debut novel.--Ellery Queen Mystery Magazine

Aimee Hix is a former defense contractor turned mystery writer. She's a member of Sisters in Crime. What Doesn't Kill You is her debut novel.
Loading...
or
Not Currently Available for Direct Purchase