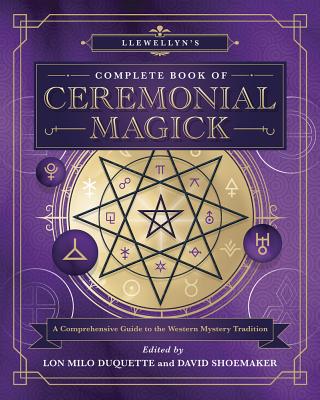 A Comprehensive Guide to the Western Mystery Tradition

A Comprehensive Collection of Magical Wisdom in One Indispensable Book

Llewellyn's Complete Book of Ceremonial Magick brings together the myriad occult philosophies and techniques necessary for a thorough understanding of the esoteric arts. This magnificent treasury is filled with fascinating insights from today's most esteemed working practitioners, developing the rich details of a dozen topics that together comprise the Western Mystery Tradition. Within these pages, you will explore the rituals and ideas that have shaped the history and modern practice of magick. Edited by virtuoso occultists Lon Milo DuQuette and David Shoemaker, this brilliant collection of new writings is the preeminent reference work on the occult arts and sciences.

Lon Milo DuQuette (Costa Mesa, CA) is a preeminent esoteric scholar and the author of sixteen critically acclaimed books on magick and the occult, including Enochian Vision Magick and The Chicken Qabalah of Rabbi Lamed Ben Clifford.David Shoemaker (Sacramento, CA) is a ritual magician and the author of several occult books, including Living Thelema. David is the Chancellor and Prolocutor of the Temple of the Silver Star and a member of the Ordo Templi Orientis. Stephen Skinner began his career as a Geography lecturer and magazine publisher, but his long term interests have always been Western magic and feng shui. During the 1970s he was the driving force behind Askin Publishers, producing a number of classic magical works by Cornelius Agrippa, Paracelsus, Austin Osman Spare, Aleister Crowley, and others. During the 1970s he co-wrote many books with Francis King, including the still popular Techniques of High Magic. Also with Francis King he wrote Nostradamus. His interest in prophecy stimulated by this book, he went on to write the best selling Millennium Prophecies. Stephen is credited with bringing the art of Feng Shui to the West, and in 1976 he wrote the Living Earth Manual of Feng Shui, which was the first English book on feng shui in the 20th century. Stephen has written more than 35 books, which have been published worldwide in 28 different languages. These books have had introductions by such diverse people as Colin Wilson, HRH Charles Prince of Wales, and Jimmy Choo, shoe designer to the stars. Stephen lives in Singapore. Stephen is the first Westerner to be awarded the title of Grand Master of Feng Shui by the International Feng Shui Association.
Loading...
or support indie stores by buying on