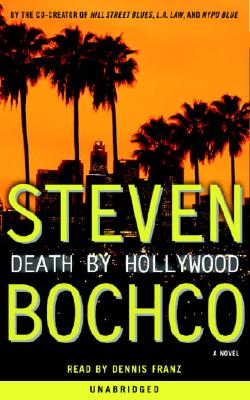 From the acclaimed co-creator of Hill Street Blues, L.A. Law, and NYPD Blue, Death by Hollywood is a suspenseful, shocking, and darkly comic crime novel about a screenwriter, a billionaire's wife, a murder, and, of course, a cop.

"There used to be a writer by the name of Merle Miller, who wrote that people in Hollywood are always touching you--not because they like you, but because they want to see how soft you are before they eat you alive."
So begins this seductive and surprising novel by two-time Edgar Award–winning writer Steven Bochco, in which a down-on-his-luck screenwriter named Bobby Newman tries to turn a brutal murder into his next movie payday.

One day, while spying on his Hollywood Hills neighbors through his $4,000 Bushnell XR90 electronic telescope, Bobby sees a beautiful socialite making love to a handsome Latin actor named Ramon. When their pillow talk takes a turn for the ugly, Bobby watches in horror as the woman bludgeons her lover to death with his own acting trophy. Deciding to write about it instead of reporting it to the cops, Bobby insinuates himself into Detective Dennis Farentino’s murder investigation, forging an unusual friendship with the cop that turns out to be more complex than either of them had bargained for. Before long, Bobby has dragged the detective, his estranged wife, his lover, and his agent into a Hollywood fun-house hall of mirrors, where only the most manipulative player will survive.

Savvy, funny, sexy, and streetwise, Death by Hollywood is the tale Steven Bochco couldn't tell on television. It is the work of an ingenious storyteller, certain to enthrall readers from beginning to end.

Praise For Death by Hollywood…

"Death by Hollywood heralds a devastatingly funny new voice in fiction. Steven Bochco takes us on a twisty and dark murder investigation, hitting producers, writers, actors, and cops squarely below the belt, where, as you all know, Hollywood resides. This is a book you can’t put down. If Bochco doesn't write another one soon, I'll personally drive over to his house and start begging. A classic."
--Stephen J. Cannell