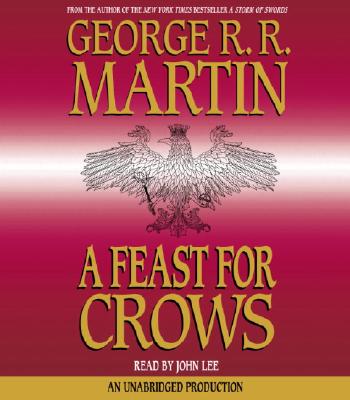 A Feast for Crows (Compact Disc)

GAME OF THRONES: A NEW ORIGINAL SERIES, NOW ON HBO.


It seems too good to be true. After centuries of bitter strife and fatal treachery, the seven powers dividing the land have decimated one another into an uneasy truce. Or so it appears. . . . With the death of the monstrous King Joffrey, Cersei is ruling as regent in King’s Landing. Robb Stark’s demise has broken the back of the Northern rebels, and his siblings are scattered throughout the kingdom like seeds on barren soil. Few legitimate claims to the once desperately sought Iron Throne still exist—or they are held in hands too weak or too distant to wield them effectively. The war, which raged out of control for so long, has burned itself out.

Praise For A Feast for Crows…


"The only fantast series I'd put on a level with J.R.R. Tolkein's The Lord of the Rings…. It's a fantasy series for hip, smart people, even those who don't read fantasy…. If you're new to the series, you must begin with Book 1, A Game of Thrones. Once you're hooked…. you'll be like the rest of us fans, gnawing your knuckles until book 5”—Marta Salij, Detroit Free Press