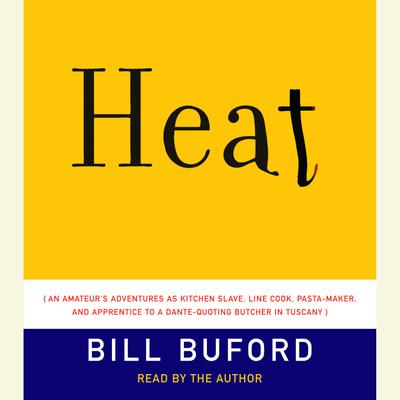 From one of our most interesting literary figures – former editor of Granta, former fiction editor at The New Yorker, acclaimed author of Among the Thugs – a sharp, funny, exuberant, close-up account of his headlong plunge into the life of a professional cook.

Expanding on his James Beard Award-winning New Yorker article, Bill Buford gives us a richly evocative chronicle of his experience as “slave” to Mario Batali in the kitchen of Batali’s three-star New York restaurant, Babbo.

In a fast-paced, candid narrative, Buford describes three frenetic years of trials and errors, disappointments and triumphs, as he worked his way up the Babbo ladder from “kitchen bitch” to line cook . . . his relationship with the larger-than-life Batali, whose story he learns as their friendship grows through (and sometimes despite) kitchen encounters and after-work all-nighters . . . and his immersion in the arts of butchery in Northern Italy,
of preparing game in London, and making handmade pasta at an Italian hillside trattoria.

Heat is a marvelous hybrid: a memoir of Buford’s kitchen adventure, the story of Batali’s amazing rise to culinary (and extra-culinary) fame, a dazzling behind-the-scenes look at a famous restaurant, and an illuminating exploration of why food matters. It is a book to delight in, and to savour.

Bill Buford is a staff writer for The New Yorker, where he was the fiction editor for eight years. He was the founding editor of Granta magazine and was also the publisher of Granta Books. His previous book, Among the Thugs, is a nonfiction account of crowd violence and British soccer hooliganism. He lives in New York City with his wife, Jessica Green, and their two sons.