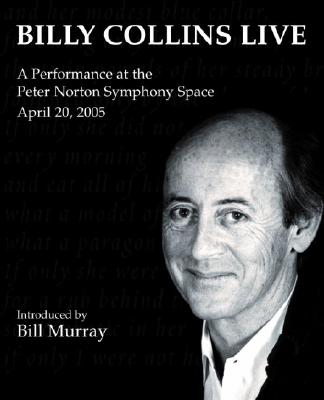 A Performance at the Peter Norton Symphony Space

In this exclusive audio publishing event, Billy Collins, former U.S. Poet Laureate, shares an evening of his poetry in a benefit reading for WNYC, New York Public Radio. Often compared to Robert Frost, his poetry has been embraced by people of all ages and backgrounds, and his readings are most often standing room only.
Performed by the author at Peter Norton Symphony Space in New York City, Billy Collins reads 24 of his poems, including -Dharma- --a spiritual yet humbling ode to man's best friend, -The Lanyard--an amusing recollection about the popular, if not pointless, summer camp pastime, and -Consolation- --a tongue-in-cheek reflection of a cancelled European trip, and the benefits of staying home instead. In addition to the poetry readings, Collins also spends some time in a brief question and answer session where he reflects on what makes good poetry, his own process of reaching his audiences as a poet, the success of his Poetry 180 programs in schools nationwide, and an amusing sidebar on his memories growing up as an only child. At times pensive and sardonic, amusing and subtly sarcastic, Billy Collins Live celebrates both the simple and the complex in a language that appeals to all.

Billy Collins is the author of six collections of poetry, including Sailing Alone Around the Room; Questions About Angels; The Art of Drowning; and Picnic, Lightning. He is a Distinguished Professor of English at Lehman College of the City University of New York. Collins is the Poet Laureate of the United States. From the Hardcover edition.
Loading...
or
Not Currently Available for Direct Purchase