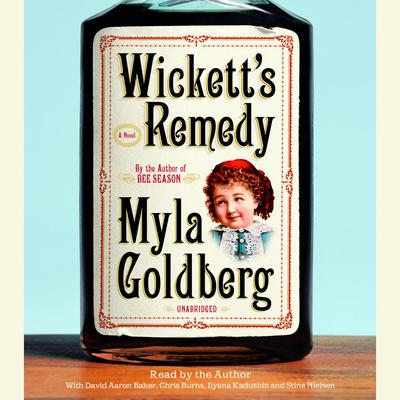 The triumphant follow-up to the bestselling Bee Season, Wickett’s Remedy is an epic but intimate novel about a young Irish-American woman facing down tragedy during the Great Flu epidemic of 1918.

Wickett’s Remedy leads us back to Boston in the early part of the 20th century and into the world of Lydia, an Irish-American shop girl yearning for a grander world than the cramped confines of South Boston. She seems to be well on her way to the life she has dreamed of when she marries Henry Wickett, a shy medical student and the scion of a Boston Brahmin family. Soon after their wedding, however, Henry shocks Lydia by quitting medical school and creating a mail-order patent medicine called Wickett’s Remedy. And then just as the enterprise is getting off the ground, the Spanish Influenza epidemic of 1918 begins its deadly sweep across the world, drastically changing their lives.

In a world turned almost unrecognizable by swift and sudden tragedy, Lydia finds herself working as a nurse in an experimental ward dedicated to understanding the raging epidemic — through the use of human subjects.

Meanwhile, we follow the fate of Henry’s beloved Wickett’s Remedy as his one-time business partner steals the recipe and transforms it into QD Soda, a wildly popular soft drink.

Based on years of research and evoking actual events, Wickett’s Remedy perfectly captures the texture of the times and brings a colourful cast of characters vividly to life, including a sad and funny chorus of the dead. With wit and dexterity, Goldberg has fashioned a novel that is both charming and grand. Wickett’s Remedy announces her arrival as a major novelist.


South Boston belonged to Lydia as profoundly and wordlessly as her thimble finger. Her knowledge of its streets was more complete than any atlas, her mental maps reflecting changes that occurred from season to season, day to day, and hour to hour. Each time she left 28 D Street — one among a row of identical triple-decker houses, the tenements lining the street like so many stained teeth — her route reflected this internal almanac. . . .

For ten years this was enough. Then in fifth grade, Lydia saw a city map and realized her entire world was a mitten dangling from Boston’s sleeve. Across the bridge lay Washington Street — the longest street in all New England — which began like any other but then continued north, a single determined thread of cobblestone that wove itself through every town from Boston to Providence. Once Lydia saw Washington Street she knew she could not allow it to exist without her.
—excerpt from Wickett's Remedy

Myla Goldberg is the author of the bestselling Bee Season, which was named a New York Times Notable Book in 2000 and made into a film, and, most recently, of Time’s Magpie, a book of essays about Prague. Her short stories have appeared in Harper’s, McSweeney’s, and failbetter. She lives in Brooklyn, New York.