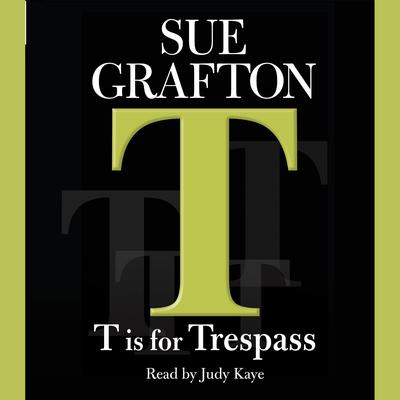 In what may be her most unsettling novel to date, Sue Grafton’s T is for Trespass is also her most direct confrontation with the forces of evil. Beginning slowly with the day-to-day life of a private eye, Grafton suddenly shifts from the perspective of Kinsey Millhone to that of Solana Rojas, introducing listeners to a chilling sociopath. Rojas is not her birth name. It is an identity she cunningly stole, an identity that gives her access to private care-giving  jobs. The true horror of this novel builds with excruciating tension as the listener foresees the awfulness that lies ahead. The wrenching suspense lies in whether Kinsey Millhone will realize what is happening in time to intervene.

T is for Trespass–dealing with issues of identity theft, elder abuse, betrayal of trust, and the breakdown in the institutions charged with caring for the weak and the dependent–targets an all-too-real rip in the social fabric. Grafton takes us into far darker territory than she has ever traversed, leaving us with a true sense of the horror embedded in the seeming ordinariness of the world we think we know. The result is terrifying.