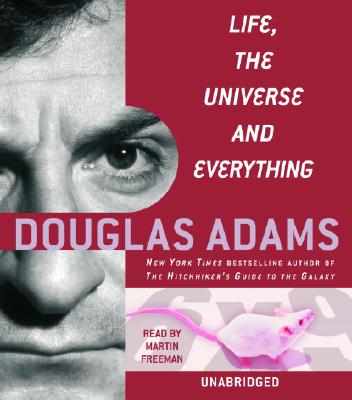 Life, the Universe and Everything

"HYSTERICAL!"
--The Philadelphia Inquirer
The unhappy inhabitants of planet Krikkit are sick of looking at the night sky above their heads--so they plan to destroy it. The universe, that is. Now only five individuals stand between the white killer robots of Krikkit and their goal of total annihilation.
They are Arthur Dent, a mild-mannered space and time traveler, who tries to learn how to fly by throwing himself at the ground and missing; Ford Prefect, his best friend, who decides to go insane to see if he likes it; Slartibartfast, the indomitable vicepresident of the Campaign for Real Time, who travels in a ship powered by irrational behavior; Zaphod Beeblebrox, the two-headed, three-armed ex-head honcho of the Universe; and Trillian, the sexy space cadet who is torn between a persistent Thunder God and a very depressed Beeblebrox.
How will it all end? Will it end? Only this stalwart crew knows as they try to avert "universal" Armageddon and save life as we know it--and don't know it!
"ADAMS IS ONE OF THOSE RARE TREASURES: an author who, one senses, has as much fun writing as one has reading."
--The Arizona Daily Star


Praise For Life, the Universe and Everything…

Douglas Adams died in May 2001 at the age of 49. He was the author of five books in the Hitchhiker's Trilogy, including "The Hitchhiker's Guide to the Galaxy; The Restaurant at the End of the Universe; Life, the Universe and Everything; So Long, and Thanks for All the Fish; "and" Mostly Harmless." His other works include "Dirk Gently's Holistic Detective Agency"; "The Long Dark Tea-Time of the Soul"; "The Meaning of Liff "and" The Deeper Meaning of Liff" (with John Lloyd); and "Last Chance to See" (with Mark Carwardine). His last book was the bestselling collection, "The Salmon of Doubt," published posthumously in May 2002. "From the Hardcover edition."
Loading...
or
Not Currently Available for Direct Purchase